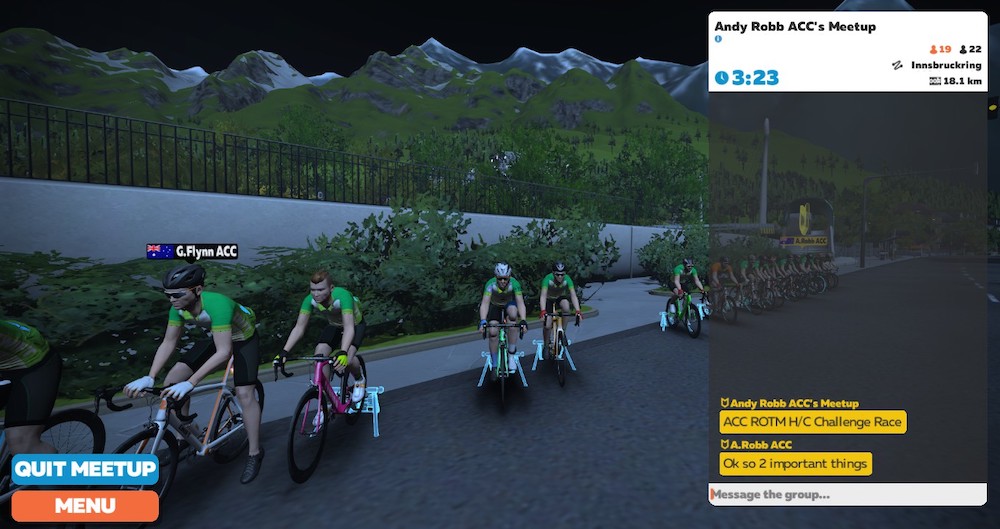 The final race in the Club Zwift April Rider of the Month (ROTM) competition was an Invitational Handicap Challenge format, with the first rider to cross the line crowned the inaugural ROTM. A fantastic turnout of 20 riders ensured competition would be red-hot for the coveted win. The challenge was enhanced by the parcours, which consisted of 2 laps of the fearsome Innsbruck World Championship 9km City Center circuit, including the decisive “Leg Schnapper” 500m 8% climb just 3km from the finish line.

Riders were set off with 1 minute intervals between grades, and within each grade riders set off in pairs/threes at 30 second intervals with the placings based on the accumulated ROTM points. As the sole D grade representative Greg Flyn was the GO rider, followed by the leading C grade pair Dene Bourke & Haydn Freeman at 1min. The remaining C grade pairings of Hugh McKellar & Clint Bourke, John Scott-Hamilton & Phil Thomas, and ROTM first-timers (welcome!) riding as the trio of Pete Hosking, Mark Haydon & Gareth Kelly followed at 30 second intervals. And the advantage of accumulated ROTM points meant the head start for Hayden and Dene would prove crucial as they forged on at a cracking pace.

1 minute later B grade setoff with the ROTM leader Paul “Hammy” Williams and his partner in crime Shaun “Pelvis” Brennan setting a cracking pace, with rumours of pre-race tactics being mooted on the discord channel. Right behind was the trio of Andy Robb, Phil Hess, and Tamworths Ken Boldery, with the final B grade trio of powerhouses Mick Hoult, Nathan Paull, and Pete Harris hot on their heels. Finally, 1 minute later the sole A grade pairing of Tom Simmonds and Olly Harris were underway, and from early on it was clear they would have an impact on the race as the set a smoking pace of close to 5kmh in the opening sections.

The first ascent of the Leg Schnapper saw D & C grade maintain a healthy lead, but behind them the race was ripped apart – Hammy & Brenno were the first B grade riders over the top, but behind them the pairings had been blown apart. Next to emerge over the top was Andy, PhilH and Nathan, but right behind them Olly had made a solo charge and was riding at a furious pace with Houlty on his tail which soon saw the riders coalesce into a quintet that was motoring along and shredding the gap to the riders in front. 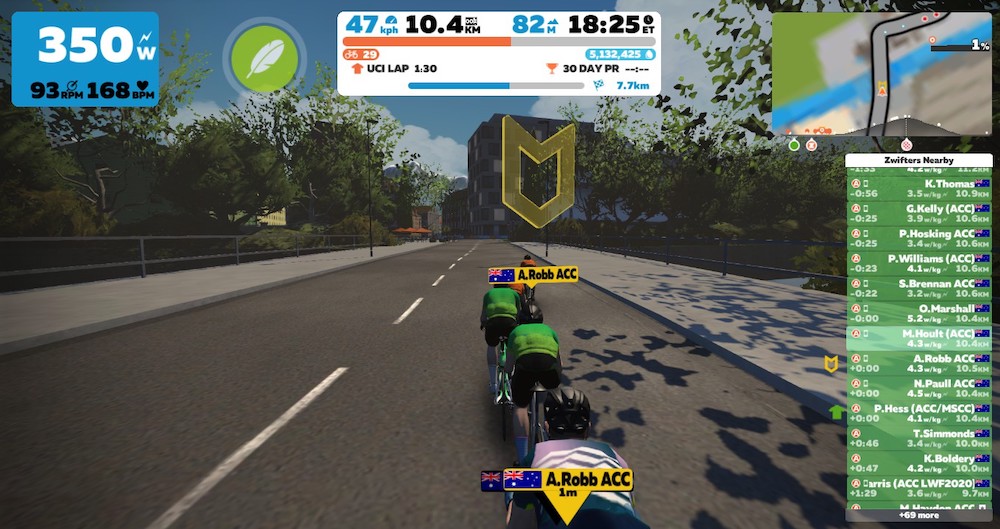 As riders hit the second lap, it would inevitably come down to the final climb of the Leg Schnapper, and although Hayden, Greg & Dene hit the ascent first, only Hayden would emerge first, holding a 20 second gap over Olly who had dropped all the other riders. This left a thrilling finale that would come down to 3km TT with the only question being whether Hayden could hold on. But as Olly turn on an impressive display of power riding, the gap melted away, and as they went under the flame rouge Olly hit the front and rode clear to take out the title of April Rider of the Month – well done Olly.

In a barnstorming finish Hayden just held on to 2nd place, while Dene out-sprinted Johnny for the final podium spot; the remaining top 13 riders all finished within a minute of the winner – a cracking mornings racing for this new format!

One other worth mention is junior rider Bernie May, who slipped into the race using his dad’s Zwift account, and had a tremendous ride to finish the race with a killer sprint to pip Mark Haydon at the line!

For the first time the race was live-streamed on the Twitch platform, and you can watch the action which starts from the 9min mark, or skip to 26mins to watch the final 4km action-packed finish.

Thanks to all riders who participated in this new format, and we’ll be sure to fine tune this for future events.

See you next week as we kick of the May ROTM series, and we return to the sanctioned racing format with rumours of a return to the Big Apple with a KOM finish!