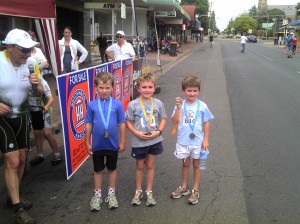 Watch those pedals fly as the juniors fight for the win

If it’s Autumn, noise coming from downtown can mean only one thing:  Mark Bullen’s dulcet tones on the public address system, Peter Georkas squealing the tyres of his company car desperately trying to stay ahead of flying riders, maybe the Killen Smash Repairs truck towing away a car parked thoughtlessly on the track.  Maybe the hissing steam of the Goldfish bowl or Altitude as they pour endless coffees for the happy crowds.

On top of that, there is bike racing to watch and lots of it.  Not just racing though – quality racing on a fast track that favours the brave and punishes indecision.

Once the volunteers had cleared the track and completed the setup, nervous riders circulated the track as the first round of Juniors readied themselves for racing.  Armidale rider Freya Weston lead the small bunch out early, riding with determination but controlling the pace until Coffs Harbour rider Troy Hardaker slipped to the front, slowed the pace for half a lap, then turned up the wick quickly, stringing out the pack and dropping Lachie Harris (Armidale) and Ben Sullivan (Armidale).  Freya along with Jack Parker regained their composure as the race continued, with Troy Hardaker able to turn his race dominance into a win from Jack, with Freya coming in third place.

The D grade field featured a few riders backing up from the juniors along with a mixture of developing seniors.  An incident on the start line featuring Adam Bourke and Coffs Harbour veteran Alan Miller was quickly forgotten as the riders took off quickly for the opening lap.  Kyle O’Hara looked dangerous early, never far from the front of the field and attentive to opening gaps between the leading riders.  First Karlee McMillan, then Ayllie Allen struggled to stay on as the relentless pace at the front of the pack strung out the field.  O’Hara was never far from the action as Gavin Miller and Mark Jones swapped turns in front of him.  The bell indicating the first sprint saw Sam Jenner using his track experience to outthink and outrun the pack on both occasions, each time folding neatly back into the paceline after taking the cash.  The first sprint saw further fragmenting in the field as Dewald Burger and Adam Bourke lost touch and formed a groupetto.   The main field starting lapping back markers, an opportunity for Sam Jenner to make a small break but he was unable to hold it from a hard charging Kyle O’Hara and Dylan Sunderland.  The still large 10 rider pack exploded on the bell, with Kyle O’Hara unbeatable although chased hard by Sam Jenner, with Dylan Sunderland in third place.

A full to overflowing C grade went hard from the start, with little mercy for stragglers, although the large pack stayed largely intact for the entire (fast!) race.  Brady Ingram won the first sprint, with Grant Howard taking the second sprint, neither managing to make much of a dent in a determined pack.  Peter Creagan entered the final corner at breathtaking speed in first place only to be swamped by the bunch as they sprinted up the hill for the finish.  The race was won by Brady Ingram from Alistair Lane, with Grant Howard paying the price for his early sprint with a third place, Peter ending up in fourth.

In between the relentless action, the novices wheeled out their bikes for a quick race to the delight of the crowds.  Nothing will bring a smile to your face faster than seeing Ryan Harris and Sam and Tom Bible whizzing their legs like egg beaters powered by nothing but enthusiasm and what I can only assume was a metric tonne of red jelly beans.

B grade was a far more serious affair, Pat McMillan featuring heavily at the pointy end of the field at the start of the race.  Mark Gilmour from Grafton then managed to escape a few seconds off the field which he quickly stretched out into 10 seconds and then 15 as the pack was reluctant to chase.  Finally, Peter Kent (FFWD) ground his way out of the glue to join Mark at the 10 second mark and the pair started working efficiently together to stay away.  Riders from Inverell reluctantly put the bit between their teeth and the extra pace saw Kent and Gilmour re-integrated before the first sprint lap.  As the bell was run Erron Henessy found a set of magic bearings or perhaps a hidden electric motor and tore shreds out of the pack to take the first, second and third sprints in a dominating style that only showed signs of flagging on the third sprint.   Between sprints, the pack largely stayed together with the exception of Pat McMillan, who once again snuck out from the front and established a 4 second gap only to be swallowed by by a determined bunch.  Once the sprints were decided,  Ryan Thomas from Inverell decided it was time to play and used the start/finish hill to full advantage as he quickly established a 10 second gap over the field, which was again reluctant to chase.  Chris Jones was the only rider to try, although his brave effort came to nothing.  Ryan held a 7 second gap into the second last lap as the bunch looked at each other, curious as to who was going to go next.  Their indecision played straight into Ryan’s hands and he turned it into a 9 second advantage as the bell was rung, far too late for the chasers.   Ryan won the race by 10 seconds away from Alexander Johns and Kane Ireland.  It was a nail-biting finish which had ominous lessons for A grade.

Kieren Lewis from Tamworth started proceedings with an early break, while his teammates controlled the pace at the front of the chasing pack.  The opening pace was so fast even local speed demon Brent Weston struggled to stay in touch.   As the bell for the first sprint was rung, the race closed back up quickly with Craig Evers and Dane Crawford sprinting hard for the cash, then suddenly realising they had made a sizeable gap on the field.  Tim Papworth cleaned up 3rd in the sprint but had no hope of catching the pair on his own, so he slipped back to the security of the bunch.  From there we were treated to a faster version of the B grade race:  although this time we had a pair of opportunistic riders in a break with an indecisive bunch unable or unwilling to chase.   The gap gradually widened to 20 seconds – enough for Evers and Crawford to disappear permanently from sight from the chasers, which finally prompted Nathan Chiswell to chase off the front.  The pack responded and the gap to the two leaders started dropping at around 2 seconds a lap until they were down to 12 seconds lead for the second sprint.  The leaders did not appear to contest the cash as their lead dwindled to 9 seconds.  At this point, the McDonalds-NAB team started to dominate the main field, although the two leaders gradually opened their lead back up to 17 seconds.  An incident at the bottom corner of the field involving an Inverell and Armidale rider resulted in a dramatic crash (thankfully no serious injuries).  Again, bunch indecision worked to the advantage of the leaders as they opened their lead back out to 25 seconds to set up another cake walk for the intermediate sprint.  The sprint turned to minor chaos in the main field as small groups formed here and their trying to organise a chase while the leaders extended to 40 seconds.  Nathan Chiswell attempted again to bridge the gap but with the leaders out of sight and coming in hard on the tail of the bunch.  The bell for the final lap was rung as the two leaders lapped the main field and kept going for the win.  First across the line was Craig Evers, with his opportunistic partner Dane Crawford in second.  Dan Alcock lead the bunch home to take third place.

On countback, the Waki-Lexus team were overall first, McDonalds-NAB second and the combined Tamworth/Inverell team a scrappy third.

Big thanks must go to the Bullen family for manning the start/finish line, for Mark’s usual excellent job of calling the races, informing the crowds and mis-pronouncing riders names in an endearing style that rivals Phil Liggett at his most confused.  Big thanks too for Deb McMillan and Leanne McMillan who setup and manned the registration desk, Ray Phillips tireless hawking of raffle tickets and countless others who give freely of their time to make a successful race.  Most of all, thanks to Andrew Swan, club president, for his mercifully short organisational meetings.