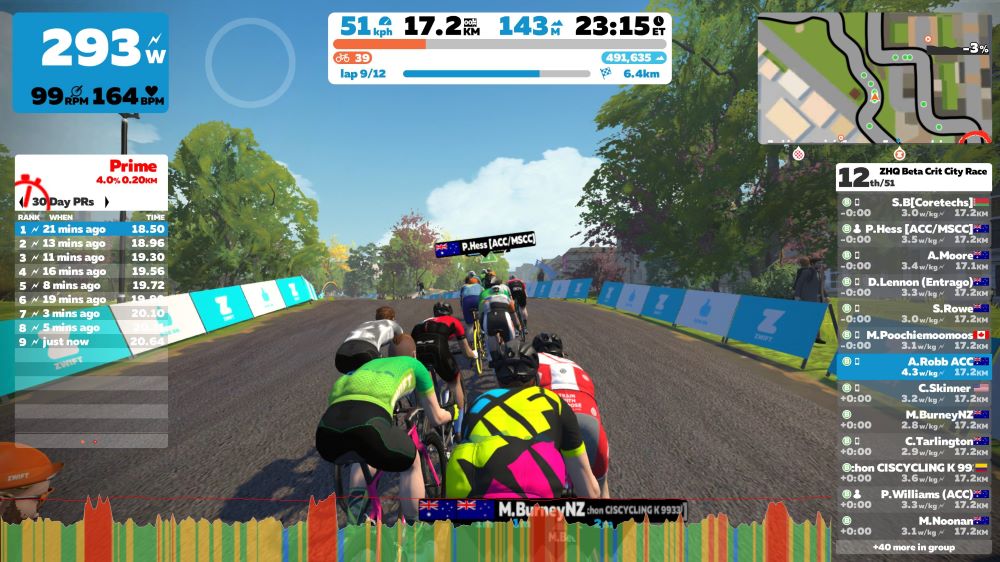 We kicked off the 5-race May Rider of the Month (ROTM) competition with a visit to Crit City for graded scratch Crit racing on the super-fast 2km crit circuit for 12 laps for a total of 24km of racing. The club sanctioned race featured some new Zwift-beta functionality to manage sandbaggers in each grade. This affected riders who produce power well in excess of the grade they are racing in, and results in the rider having a visual green cone-of-shame placed over their avatar for the duration the race, aswell as the game significantly throttling their power back which effectively eliminates them from the race. So, the burning question in all the pre-race chatter was whether any Armidale (ACC) riders would receive the cone-of-shame!

14 ACC riders lined up in the start pen, and with the cone of shame looming large Dene Bourke stepped up to B grade, while Mark Haydon and Greg Flynn stepped up to C grade, where we also welcomed Andrew Swan for his ROTM debut. With grades set off at 1 minute intervals, first out of the gate was B grade with 8 ACC riders, and with usual searing pace at the gun was too hot for Dene to handle, and with ~400w required to hold wheels Gareth Kelly and John Scott-Hamilton were the next riders to feel the heat. As the dust settled a couple of non-club riders who had been driving the pace received the green cone, and as they were throttled back the group was able to settle the pace for the remaining laps.

C grade was next off with 6 ACC riders, and in a similar pattern to B grade the cone-of-shame took the usual sandbaggers out of the race, enabling local riders to tuck into the group-draft as the laps rolled down. The first C grade casualty was Hugh McKellar, who had an Apple TV remote malfunction that took him out of the front of the race, while the step up to C grade was a tough assignment for Haydo & Hayden Freeman who had settled into their own pace. But a trio of Swanny, Clint Bourke & Greg Flynn were right in the mix, and were well placed to contest the final sprint as they bell lap came around.

And in a sensational C grade finish, Clintos took out the ZPower win and maximum ROTM points, with Swanny taking 2nd, and Greg taking a top 10 finish in 9th place. Well done Clint on a great win! Kudos to Hugh who recovered from his “mechanical” to complete the race, with his nemesis Hayden just pipping him at the post, while Haydo kept up a solid effort to fnish strongly, although all 3 fnished outside the top 30% of the race required for ROTM win points.

Meanwhile, B grade had 5 ACC riders still in the mix as the finish loomed large. After some tireless lead-out work from IronMan Mick Hoult, Sean Brennan, & Phil Hess, first to jump was Paul “Hammy” Williams, who quickly opened up a gap – but Hammy had jumped the gun and as a blur of riders raced past a well timed aero power-up enabled Andy Robb to get his nose in front to take out the win, while Hammy held on for a top 10 finish, and the remaining trio rolled home with the lead group – great team work guys! Kudos to Johnny and Gareth who rolled in 1 lap behind the lead group, while Dene finished a minute later and all the stronger for the hit-out.

Well done to all riders for completing the race and avoiding the dreaded cone-of-shame, and we return for the second round of the May ROTM series next week!

MAY ROTM ROUND 1 RESULTS