16 riders turned up on a mix of pretty fancy specialised gravel machines and MTBs, Dene bucking the trend by insisting on some semi-rusted heavy old machine of indeterminate provenance. The weather was perfect Flandrian conditions – cool, wet & windy! The race briefing managed to confuse everyone about the turns and twists of the (slightly) modified course. No matter, signage was clear and road junctions were covered by John Scott-Hamilton and David Harris (and friends) as well as Col and Wilfried zooming back and forth.

The GO group consisted of Jacqui on a MTB, plus Pete “Roubaix” Wilkinson & Matt Bedford on mean looking gravellies. Matt had just started racing with the club before the virus shutdown and he has obviously been training secretly – the handicapper will take note! The 2 minute trio of Jo on her trusty CX machine, Richard Wilko on his shiny new Diverge, and Toby Inglis on a MTB had split up by Petersen’s and Toby turned at the monument aiming to smash out a solo victory.

Clint, Dene, Swanny and Carl Hooton made up the 8 minute group and it was soon obvious that Dene, Clint and Carl were outclassed on their MTBs as Swanny sailed off into the distance…..Holly and “Trackstand” Hugh started a further 2 minutes back and, again, Hugh’s gravel bike (albeit somewhat modified) charged away from Holly’s heavier machine on the initial 7.5km tar section towards the monument. Off 12 minutes, Andy Robb and Jason were quickly mopped up by the scratch pair of Olly and Michael Harris who made up their 1 minute handicap by the first gravel section, and this group turned into a Fearsome Foursome that was mowing down all other riders on the outward leg. 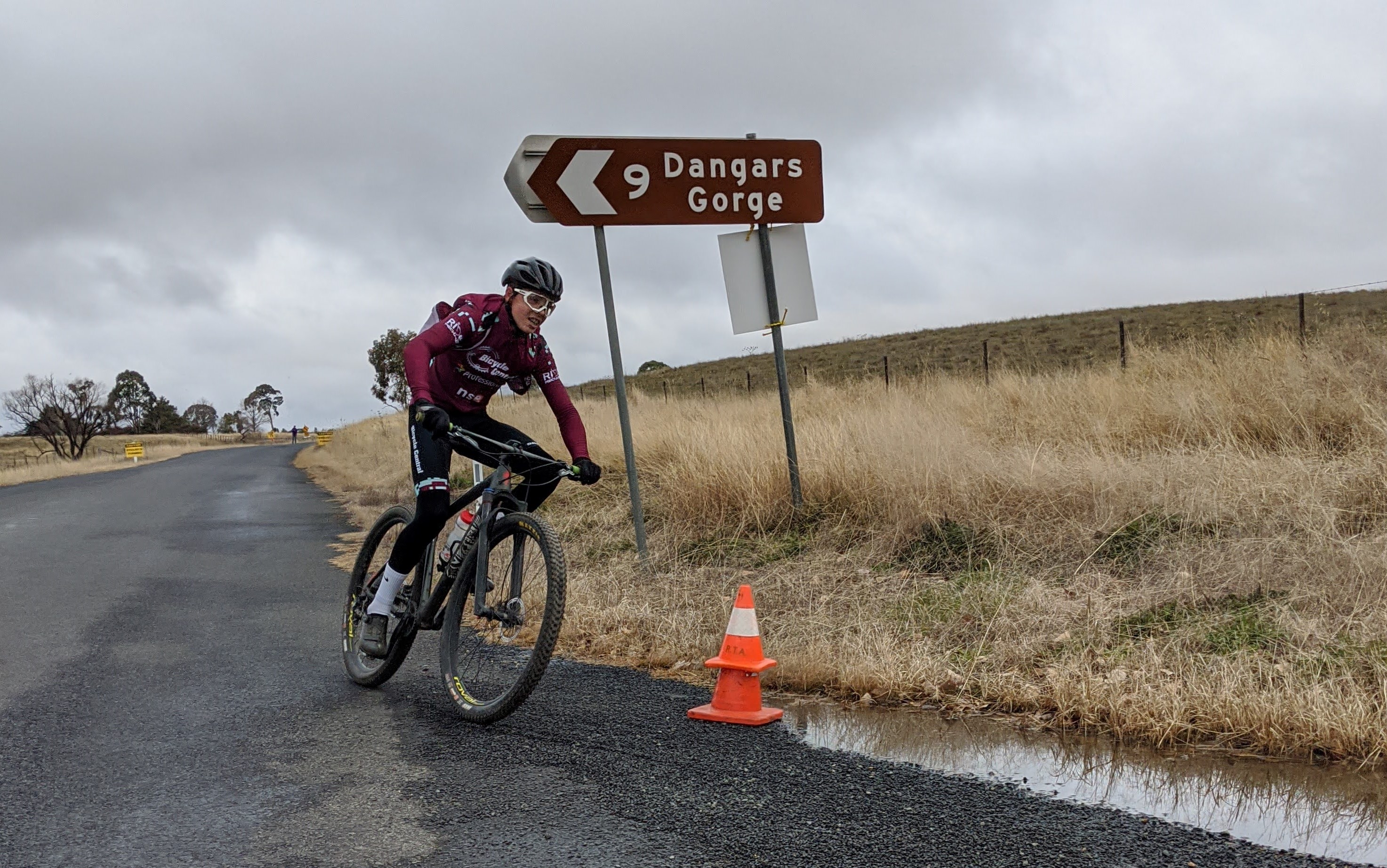 By the first turn up Dangarfalls Road (monument), Matt had gained a bit of an advantage as “Roubaix” had stayed with Jacqui so far. This changed immediately after the turn and Matt sat up to wait for PW and the two formed a partnership that put a lie to their handicaps as they kept daylight between themselves and the rest of the pack right to the finish line.

The two front-markers reached the turn at 28m17s, followed by Toby 54 seconds later – it looked like he would be able to reel them in on the way home. Jacqui turned next, 96 seconds in arrear leading Richard by 38 secs and Jo a further 18s back – it had become a race of attrition. Swanny had dug deep in the first two dirt sections and turned 3 secs ahead of Dene and Carl and it looked like Clint had lost contact with his group. 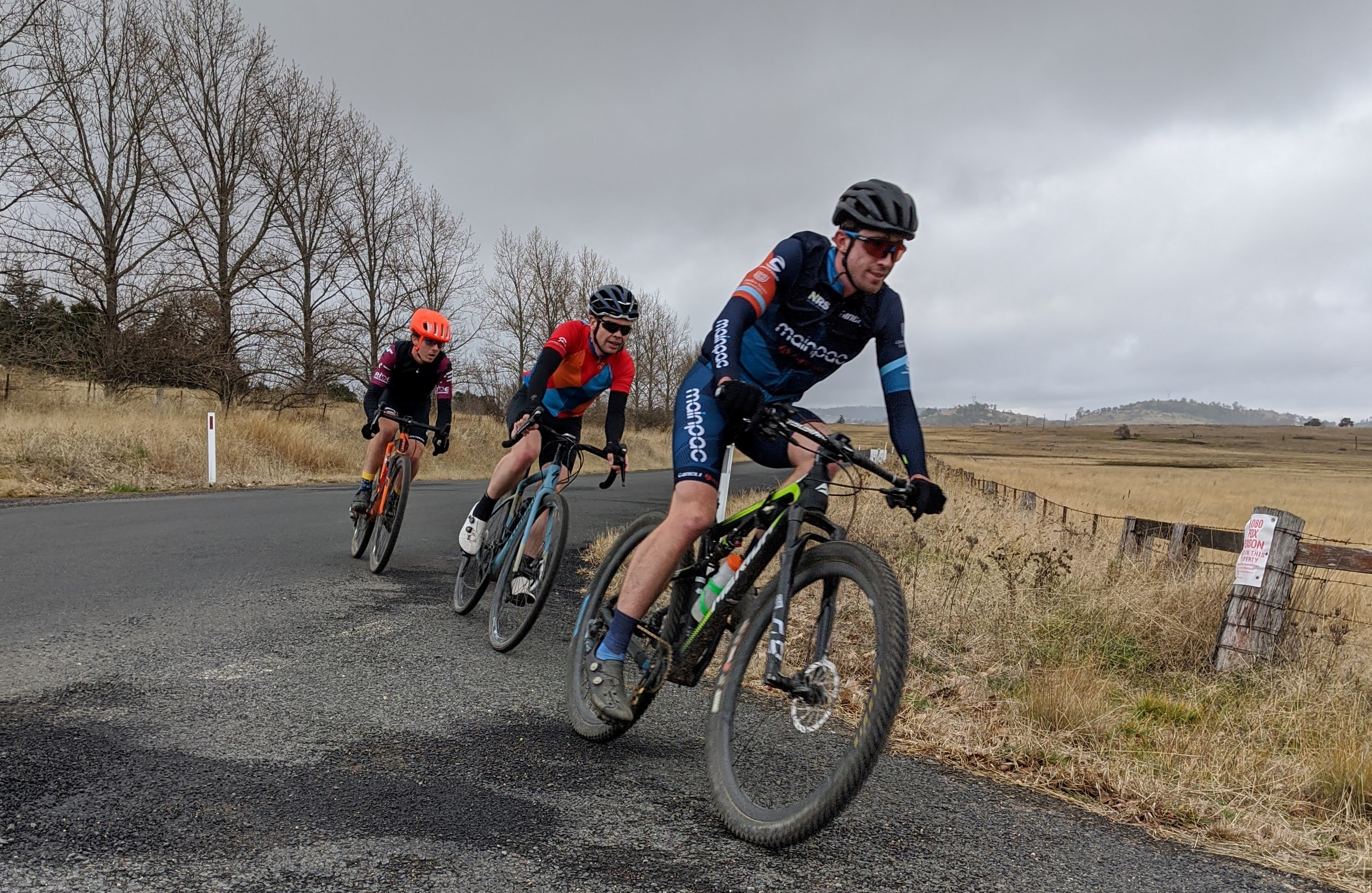 The FF turned 10s later, having charged down Hugh and Holly along the top of the first climb. PW and Matt swapped turns all the way home and crested Knobs Hill with Toby about 20s back – but that was as close as Toby got: Pete and Matt upped the tempo and ended up nearly 2 minutes ahead. Toby was denied a podium place by Mick and Olly showing no mercy as they charged towards the finish line and beat him by 4 seconds. Holly picked up a few places on the tough  homeward leg but failed to hold off Dene in the final sprint. Clint took out the honours of “lantern rouge” in a battle with Carl. The spread between first and last was nearly 12 minutes, but everyone seemed to enjoy this race; no punctures or mechanicals must be a first for the event.

Thanks to Wilf for this race report and doing the extensive signage over the new parcours! Many thanks also to Col and all the on-road race support making sure everyone turned safely and that no-one missed a turn. Final thanks to Dave Harris for the fantastic action shots!

We return to “normal” road racing next week with 30km graded scratch on Long Swamp – the only question being after all the recent online racing whether ZwiftPower grades should now apply?!