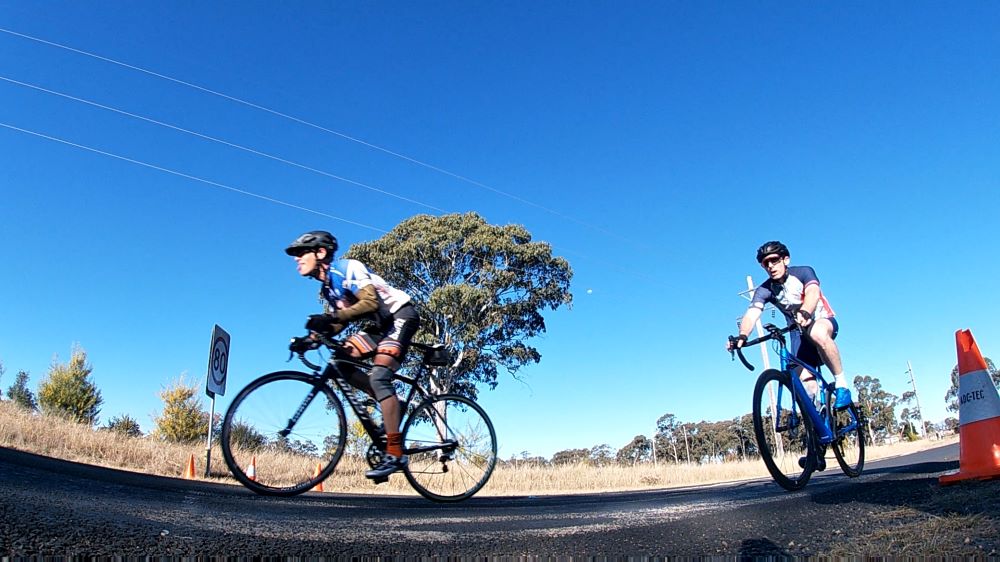 As winter draws to a close, recent inclement weather was a thing of the past, as a glorious afternoon greeted a fantastic turnout of 31 racers + 3 juniors for Road Racer of the Year (RROTY) round 4, with 30km of handicap racing on the lumpy Long Swamp course. We also welcomed new racer Mark Conway to the club…bon chance Mark!

With riders now finding their racing legs post-lockdown, it was setup for an interesting days racing, and the proceeding were kicked off with Wilf marshalling the 3 juniors for a lap of the course. 2.30mins later Mark was setoff with Olive Tutt & Jacqui King to show him the ropes. Next off Rod Christie was setoff solo at 5mins as his usual compadres were missing in action, and he was swiftly followed at 7mins by a strong looking group of 6 riders including a welcome return to club racing for Lachie McPhie, along with experienced racers Chris Belson, Mark Haydon, Greg Flynn, and Richard Wilko, with rookie racer Gareth Kelly quickly learning the ropes.

At 8.30mins the next group were looking strong with 7 riders including old heads Tinny, Swanny, Andy May & Dene Bourke, accompanying young guns Toby Inglis & Katherine Hosking; but they were dealt a fatal blow as Phil Thomas missed the start, and KegLeg power would be sorely missed as the race unfolded.

2 mins further back at 10.30mins were the quintet of Kirky, Pete Hosking, Matt Bedford, Clint Bourke, & Phil Hess, and they would have their work cutout to catch the groups already up the road. Another 2mins back at 12.30mins were the trio of John Scott-Hamilton, Pat Ferris, and Andy Robb; Block was another trio of in-form Houlty, Jason Simmonds, and Shaun Brennan at 14.15mins, while the lone Scratch rider Missile Mick Harris had 45 seconds to close down setting of at 15mins dead. 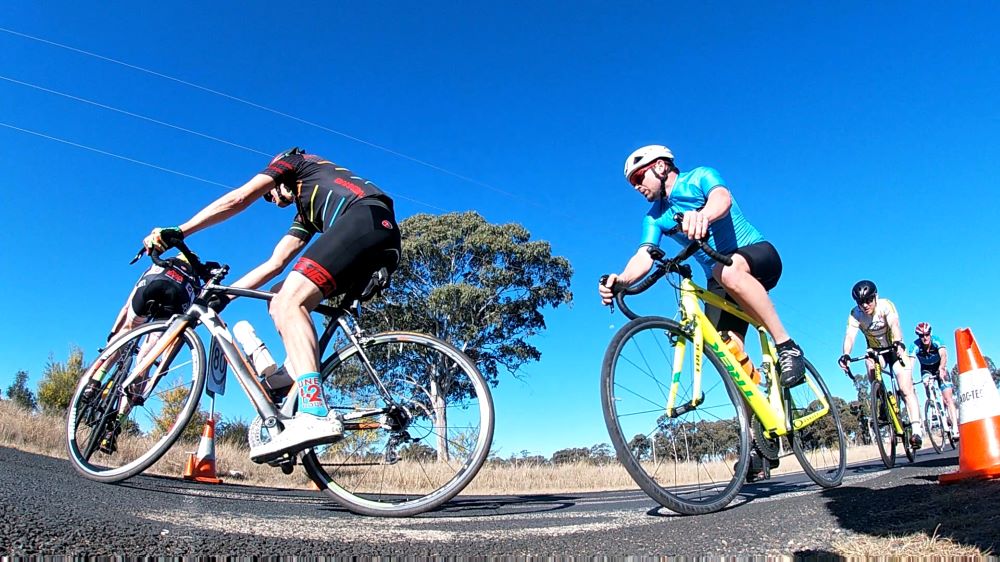 As riders hit the 15km turn at the end of the first lap, the groups were largely intact; Rod had been absorbed by the group behind adding another strong pair of legs to the mix; the next chasing group were still over 1 minute back, and without Kegleg’s power they were struggling to close the gap. Meanwhile at the back of the race Missile Mick had made the catch with Block at the turn, and this would form a potent quartet who would hunt down the groups ahead at express speed.

As the second half of the race unfolded, there were 2 elements at play – the 7min group were putting in a solid ride, and if they worked together for the duration they would have a chance of holding off the chasers; but hot on their heels were the Scratch-Block express, who were mopping up the group in-between at a rapid rate. As the groups hit the base of Dump Hill for the final push to the finish, the lead group had kept up a solid pace, and as the riders made their bid for glory it was Rod Christie who rose to the top to take out a fantastic win – well done Roddie!

Close behind were Chris Belson and Gareth Kelly who took out second and 3rd respectively, with Richard Wilko and Lachie McPhie mopping up the remaining RROTY points. But it was a close run thing, as just 9 seconds further back Scratch rider Mick Harris crossed the line for 6th and the fastest time of the day. Some outstanding rides saw the top 15 places all finish within a minute of the winner, with a particularly notable performances were by Toby Inglis who took out 7th place just behind Mick Harris, while Mark Conway worked well with the chasing riders to finish strongly in 16th – great rides Toby and Mark!

Well done to all riders for some great racing, and thanks to the weather gods for providing perfect racing conditions! Also thanks to Shaun Brennan for doing the sign, and Col for running the race! We return next week for RROTY round 5 for another 30km race on the fearsome Boorolong parcours!