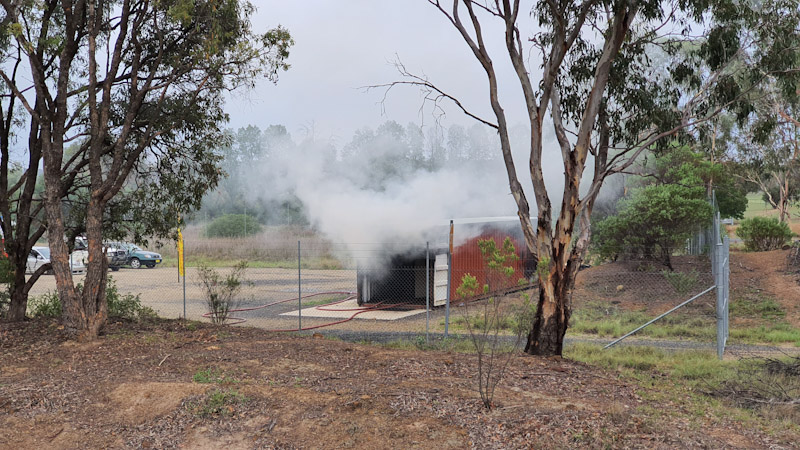 A few rain drops around 3 o’clock dampened the TEC course but failed to discourage a hardy bunch of 12 riders who turned up just before start time to witness the firies create a smoldering fire training hazard at the edge of the course, enveloping us in extreme smoke and haze….

Col came up with a modified 30-minutes-plus-3 handicap criterium format that saw three A Graders (Paul Williams, Pat Ferris and Peter Harris) taking off with a 15 second headstart over a combined B/C Grade bunch, but having to make up 1 lap on B Grade (Andrew May, Andre Swan, Carl Hooton, the Bourke boys and Emily Meehan) and 2 laps on C Grade riders Pete Wilkinson, Paul Whitford and Jacqui King.

The three A graders settled into a fast pattern of swapping turns that saw them make up half a lap very quickly and Swanny consistently went to the front of the B/C bunch to lift the tempo. And avoid an early catch. His effort dropped off Jacqui after about three laps and 3 minutes later she was caught by the A Trio – one down. Paul Whitford was the next to fall victim to Swanny’s whirling legs and once on his own he was soon passed by the relentless three amigos.

About halfway throught he race, A Grade caught the B bunch – one part of the mission accomplished with ease but still having to catch a lonesome Paul Whitford again. The difficulty would be Pete Wilkinson who had been applying all his race knowledge to stay on B Grade and still having a full lap advantage at this stage of the race. He was distanced in the first attack but knew that he needed to defend every metre of the track during the final laps…..

Harris/Ferris/Williams upped the tempo considerably and dropped Emily, Mayormaynot and Carl within one lap of joining the bunch and then shedding Swanny during the next time up the hill. The two Bourkes dug deep and stayed on the back of A Grade till the very end; Clint confirming his A status and Dene making a strong claim for future membership of the club elite squad. Swanny refused to give up and tried a few shortcuts to get into the sprint finale, but this proved a futile effort.

On 22 minutes, Paul Whitford was caught for the second time, leaving Wilko as race leader for another two minutes, but the ageing legs could not take him to victory this time…..

Pete Harris was handicapped by a misguided “helpful” shout from the sidelines confusing numbers of laps-to-go with riders-still-to-catch and this hampered his participation in the sprint to the line (sorry!). Pat Ferris continued his strong summer form with a close win over Paul Williams, followed by Clint and Dene.

Bernie May started with C Grade and continued to circle the track for the whole race – a great effort and the beginning of his transition to senior racing; hopefully he will be joined by other juniors during the next few weeks!

Thanks to Wilf and Col for running the race, and Wilf for this race report!