Stop, collaborate and listen!  Ice Cold Billy Mara wins the first properly chilly race of the year from Mark “Haydo” Haydon and Chicka Russell, while Harrison “H” Munday gets a C minus for his facebooker report.

“H.Stubbles” submits the following on the facebooker twittery thing:

Blue sky and sun shining, a great afternoon to ride your bike out Dangarsleigh road right??…………Wrong! it turns out that what looks like a nice day sitting inside in front of the fire with a coffee and warm blanket turns out that there is a continuos, freezing head wind.
Only the tougher riders showed and despite the head winds it was going to be fast with the scratch group containing The Gregatron (Greg Manttan), Swanny, ‘Iron’ Mick Hoult and H!

Groups of Riders up the road from the scratch group, such as Holly Harris and Adam ‘little’ Bourky set the pace for the others to follow and try to hang on.

Back up the road the scratch group was coming and coming at pace as well! many were caught and with the extra 10km of hills there was bound to be more.
H Munday was loving the hills and set a serious speed for the other scratch boys to keep up with.
And by the top of knobs hill all but three were caught and it was race time. Gregatron-Greg put in a mean attack with 1km to go but H didn’t let him get far, the race ended with a sprint between Greg Manttan, Mick Hoult, Andrew Swan, Dave Rugendyke and Harrison Munday for fastest time as well as 4th place as the first three crossed the line with out been caught.

The sprint was really FAST with Harrison claiming fastest time again and fourth place getting 2 or 3 bike length on Dave R putting dave in 5th Swanny 6th and Greg and Houlty not to fair behind in the sprint.
well done to all and thanks to everyone that raced on such a windy and cold, but fun day 🙂

To which my old English teacher would have responded:

The enthusiasm is obvious but the piece clearly lacks focus – the winner and place getters barely rate a mention and nobody cares who came fourth.

Not to mention the completely missing mystery arrival of Andrew “Kirkie” Kirk on somebody else bike while we puzzled how his own bike ended up back at the start with a broken rear derailleur and a massive skidmark on the tyre. This mystery was explained later by Kenny McDonald, who found Kirkie on the side of the road with his broken bike, white as a sheet and with a larger than usual sag in the back of his knicks. Kirkie had apparently put the derailleur into the back wheel, locking it up and was lucky to keep it upright.

Swannie also tells a somewhat different story of the A grade bunch, he apparently spent the whole race asking them to speed up.

Ice Cold Billy Mara put on a terrific show, largely unobserved as he broke away from Peter “Captain” Creagan and Mark “Haydo” Haydon. His impressive turn of speed on the climb back up from the second bridge was extremely impressive as he hunted the broken Go group down rider by rider. The Captain gave a valiant chase but was ultimately no match for Billy. Chicka placed extremely well given his two Go companions were of no use to him, unable to return favours from the previous race. Billy remarked on the finish line “I feel so good I could do it again” although 30 seconds later he started shivering and disappeared, his 2% body fat is great for climbing but no good for keeping warm.

Billy is apparently considering replicating this tattoo, which is something I can only encourage: 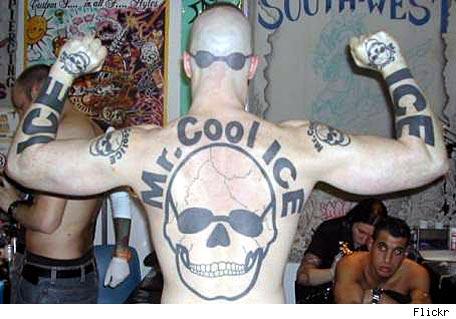 Picture of Mr Cool Ice, not as cool as Ice Cold Billy Mara