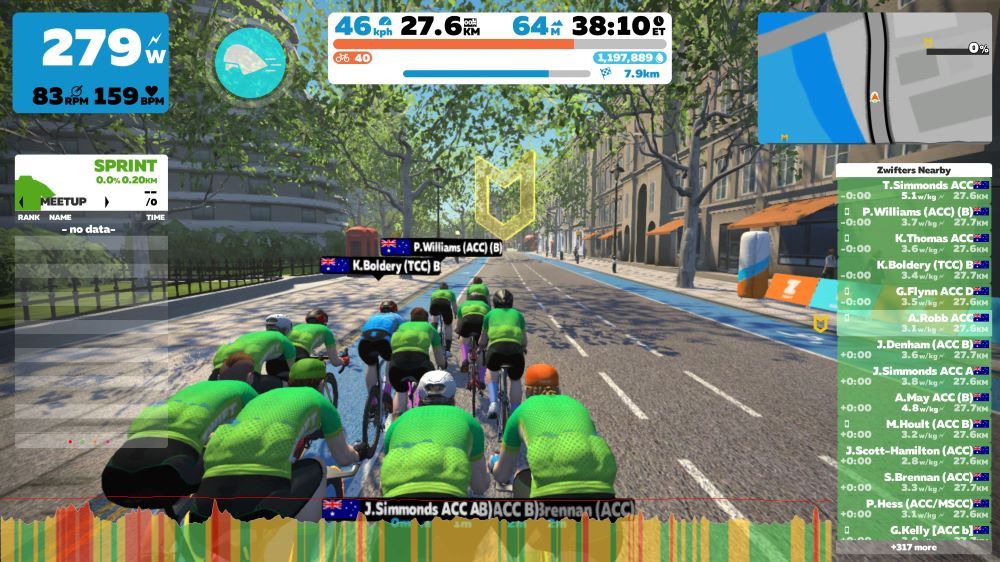 Round 2 of the InterClub Tri-Series had 24 local Tamworth and Armidale riders taking on 3 laps of the Greater London Flat loop. The format was a graded handicap, with each grade rolling down the start ramp at a set time interval – D grade would be the GO group, followed by C grade at 2mins, B grade at 4mins, a B+ grade at 5.30mins, with the last group off being A grade at 6mins. The handicap format was simple – first rider to cross the line takes home the bacon, and it would depend on groups working together to keep a fast pace on the relatively flat course and hold off the chasers behind.

As the riders hit the road and the first lap wound down, the gaps between the grades were diminishing quickly. By the end of the first lap, A grade had reeled in B+, and this 7-strong group would set a searing pace for the remainder of the ride. B grade had C grade in their sights, who in turn were starting to mop up D grade riders who had started fall off their group.

This pattern continued, and as the race compressed on the second lap, the rear A/B+ group were catching those ahead, and it was then a question off which of the riders could jump on the express train as it came racing past. By the end of the second lap, the A/B+ group had hit the front of the race, and a number of B, C, and D grade riders had tucked into the draft to form a 16 rider strong peleton. With the relatively flat parcours and a fast rolling group, this meant any of these riders would have a chance of contesting the finish as long as they could hold the wheel and keep the draft while the stronger riders tried to drive the pace.

The last lap became a race of attrition, with riders battling to hold on as the rolling parcours on the approach to the finish had racers scrambling. As riders hit the finish approach, there were still 13 racers in the mix, and to add to the melee the Zwift software had pushed the virtual finish banner 300m past the actual lap banner. This meant a number of racers misjudged the finish and kicked early, and the long sprint turned into a drag race that saw Armidale’s Jason Simmonds take out the win…well done Jason! Meanwhile an outstanding rider saw Ken Boldevy as the leading Tamworth rider…great work Ken!

Next week we have the final round of the InterClub Tri-Series, which will also be our last club Zwift race as a return to outdoor IRL racing beckons. The handicappers will be looking to adjust the time gaps to spread the grades out as we take on the Innsbruck World Championship course, so make sure you sign up for the final race!