An impressive turnout of juniors enthusiastically celebrated cycling at the driver training centre this weekend, surrounded by club members and family.  Brent Weston taking out the overall boys U19 championship, Britt Sisson the girls combined U15-U19. Kyle O’Hara won the U15 boys, Lachlan Harris tore up the track in the U12’s and Sam Bible in U10’s.

In the U10 boys provided some great action starting from their opening time trial, which was a full lap of the track rather than the usual half lap. Ryan Harris having only discarded his trainer wheels a couple of weeks ago was first to go, followed by Tom Bible at 30 seconds with elder brother Sam at 1 minute. By the top of the finishing straight they were all together, spurring each other on in what almost turned out to be a sprint finish. They then rested up for a one lap scratch race which was won by Sam, with Tom in second place and Ryan third. 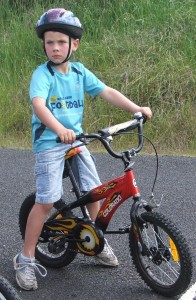 THIS IS MY GAME FACE

They then lined up for the feature race:  a 75m sprint that saw boys BMX bikes thrashed far beyond their design parameters and was possibly the race of the day, won by a hard charging and leg whirling Tom just ahead of Ryan, with Sam in third place. By virtue of wins in the time trial and scratch race Tom was the champion just ahead of Sam, with Ryan in third place.

The U12’s was also keenly contested, but with Lachie Harris taking out all three races, with an impressive 2:26 in the time trial, followed by an excellent attack to take out the two lap scratch race before powering away to win the criterium. Keiran Sullivan rode well to finish in second place, but one of the performances of the day went to Hunter Hine, who never stopped trying all day to finish in third place overall. With this sort of fighting spirit, Hunter is one to watch out for when he gets a bit more experience. 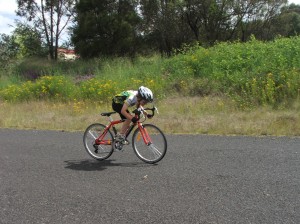 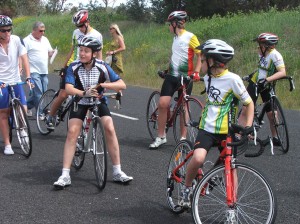 Al O'Hara reads the riot act to the juniors

Kyle O’Hara dominated the U15’s winning all three events by a big margin, including an impressive time trial of 1:53. He was challenged by Jack Parker with a 2:04 in the time trial, and by Harrison Munday who was second in the scratch race and criterium, which was enough to secure second spot overall. Adam Bourke tried hard and rode consistently to finish in third place overall. 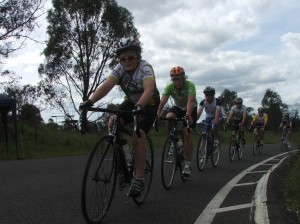 Working hard at the crit track

The Girls Division was taken out by Britt Sisson who had a close tussle with Karlee McMillan in second place. But another great performance came from Freya Weston, who despite being three years younger than the other riders gave it everything to finish in third place not far behind the other girls. 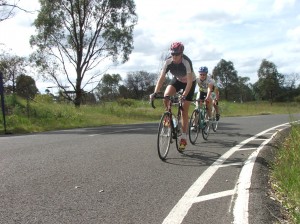 In the U19’s Brent Weston was too strong for Chris Jones who rode well for second place ahead of Angus Swan.

Congratulations to all the competitors on the day, thanks to all the Mums and Dads for bringing the kids and helping out.  Special thanks goes to Al O’Hara for running the event despite the handicap of having Wilko and Swannie “helping” him. 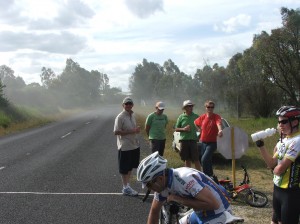 Of the spectators, a large contingent of seniors arrived after a thrash fest on Dangarsleigh road.  It took them approximately 5 minutes to catch their breath and the major topic of conversation to drift to beer.  It took another 10 minutes to ascertain what the best way was to obtain said beer, and another 20 minutes before consensus was reached that in fact the bowling club not only had beer, but was willing to sell it to practically anybody.  Much relief, chin stroking, “anybody you say?” and nodding was witnessed as the kids whizzed past, reminding the seniors of their rapidly advancing years and their encroaching thirst.  Thus satisfied that there would be less  disappointment in receiving beer than watching the kids who would be beating them next year, said cyclists departed en masse, presumably to drown their sorrows.