Can you do 1’43” around the crit circuit?  Unless your name is Kyle O’Hara, I’m guessing…no.

Kyle of course comes from a pretty fine bloodline, his father Al runs the junior races every weekend and does a fine job despite the handicap of Wilko’s constant presence.

Time trial times would embarrass many seniors.  When I asked Al why Kyle was still racing juniors when he can crack out a 1’43”, he replied “ah, he’s only 14”.

In a packed juniors program, Britt Sisson took out the wheel race and the 6 lap handicap, Tom Bible won the 3 lap handicap, Sam Bible won the scratch race, Ashton and Bailey Stace monstered the 1 lap handicap in a 1-2 finish and Jacob Banford proudly showed off some hard earned road rash from a little spill.

Upgrading yourself to B grade seemed like the thing to do for most of C grade this weekend, with Ray Phillips, Mick Sozou and Jackie Weston the only three capable of any kind of sensible decision making.  Mick showed not only brains but class in dominating the C grade race, Ray and Jackie holding his wheel grimly until Jackie baulked at the technical bit of the course, allowing Mick a couple of precious metres in which to break away.  Later joined by the dregs of B grade, he cruised over the line victorious.

B grade was a nasty, surging affair with the disparate talents of the riders on full show as the bunch concertina’d around the circuit like a Benny Hill accordian.  First they sped up, then they slowed down, then they took off like scalded cats, then they rode  like 10 sets of flat tyres.  The field gradually shed riders (Wilf holding on like a bungee was set between his teeth) until the final lap saw a spread out finish between a slumming Col Maciver, Peter “did he try or did he sandbag?” Wilkinson and a clearly delighted Nick “the man in black” Myhill, sauntering the line or just out of Folsom prison, you decide.  A small racing incident involving Ice Cold Billy Mara and Chicka Russell resulted in Chicka performing some cyclocross on the track verge, but we shall never speak of it again.

A grade looked happy, fit and content until the wiry, tanned form of Geoff Straub appeared like the ghost of christmas past, to a collective groan and co-ordinated forehead slap.  Dreams of Saturday afternoon glory now rapidly evaporated as the A grade boys realised they’d actually have to do some work rather than rely on Mick “The Indian Giver” Hoult to drag them around for 30 minutes.

I’m not privileged to know what happened during the race, other than fleeting glimpses of a cold-affected Straub putting the hurt into the A grade bunch.  He finished a clear 30 metres ahead of John Scott-Hamilton 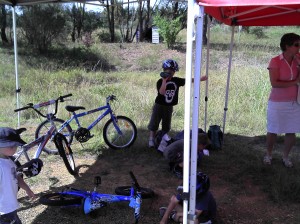 who must have had his normal cannibal appetite suppressed by the metaphorical kick in the guts.  Rob Tindale showed some fine form with a well earned 3rd place.  The space captain Kirk went where no man has gone before in 4th with Mick Hoult relegated to an uncharacteristic 5th. Brent “Best” Weston doing well just to keep in touch with what clearly was a tough race. 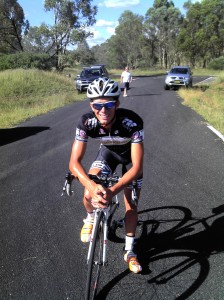