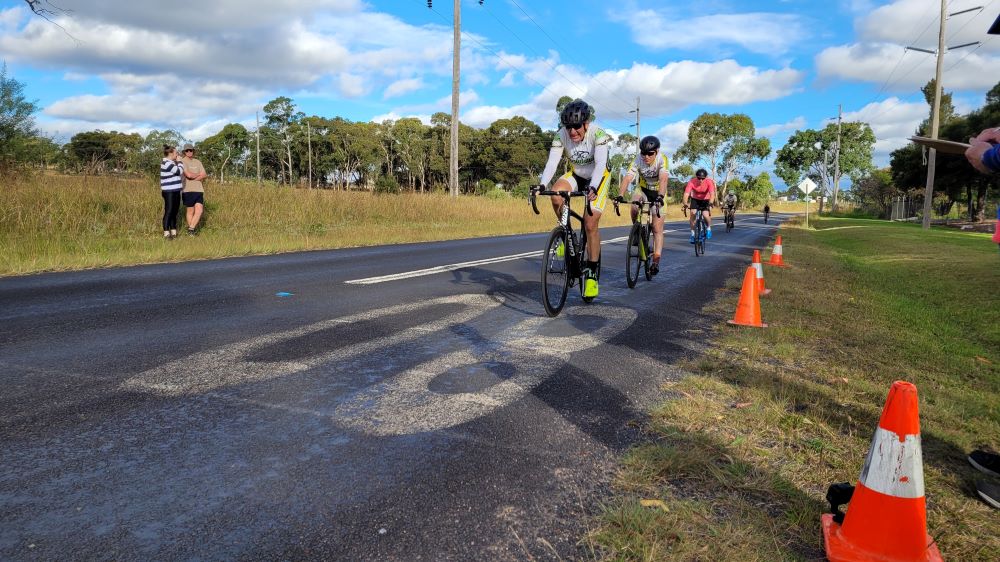 With formal race approvals in place, we returned to the road for this first time in 2021, with the season starter comprising 30km of graded scratch racing. Aswell as having the usual A, B & C grade groups, Col also shook things up with a handicap for three groups so there was overall honours at stake aswell as the individual grade results.

C grade were first off as the GO group, with a quintet of riders including new rider Laura Vargovic, along with Mark Conroy, Jacqui King, Christian Girard & Pete Wilko.

Next off were B grade at 6 mins, with 6 riders in the mix with a welcome return to club racing for Andrew May. He was accompanied by the usual selection of grizzled stalwarts including Ice Cold Billy Mara, Andrew Swann, Chris Belson, and Dene & Clint Bourke.

Last off the mark were and 8-rider strong A grade at 11 mins. As the group got the go, Missile Mick Harris lighting up the group from the start line, the numbers were shredded as under-the-weather Matt Bedford was quickly dropped along with David Cook, with John Scott-Hamilton & Holly Harris scrambling in vain to stay in contact as they finally succumbed to the frantic pace on the first time up the Imbota climb.

Apart from mayhem in A grade, the other 2 groups were working well, as C grade turned with a 3 min gap over B grade. The leading A grade quartet were a further 2mins back, and with reduced man-power they would have it all to do to catch the leading riders.

As always the final climb up Imbota would be decisive, and it was at this point that A-grade made the B-grade catch; but out front C grade were still holding out 1 minute up the road, and it was just a question of who could hang on.

As the riders crested Dump Hill for the finish, leading the charge was Christian Girard, who crossed the line to take C-Grade and Overall honours – well done Christian! Behind Christian was Mark Conroy, who also had a fast-charging A grade group snapping at his heels, but was able to hang on for 2nd in C-grade & overall; just 9 seconds later Missile Mick crossed the line to take A grade honours, with Brent second and Pat Ferris 3rd. B grade was not far behind, and Swanny took out the win with Clint coming in second, and Chris taking out the last podium spot.

Well done to all racers for some great efforts on a tough course; thanks to Col for running the race and some astute handicapping, and also thanks to Wilf for doing the signs.

Next week we return to the road for the infamous Mur de Dangarsleigh race!