May Rider of the Month Challenge Race Results 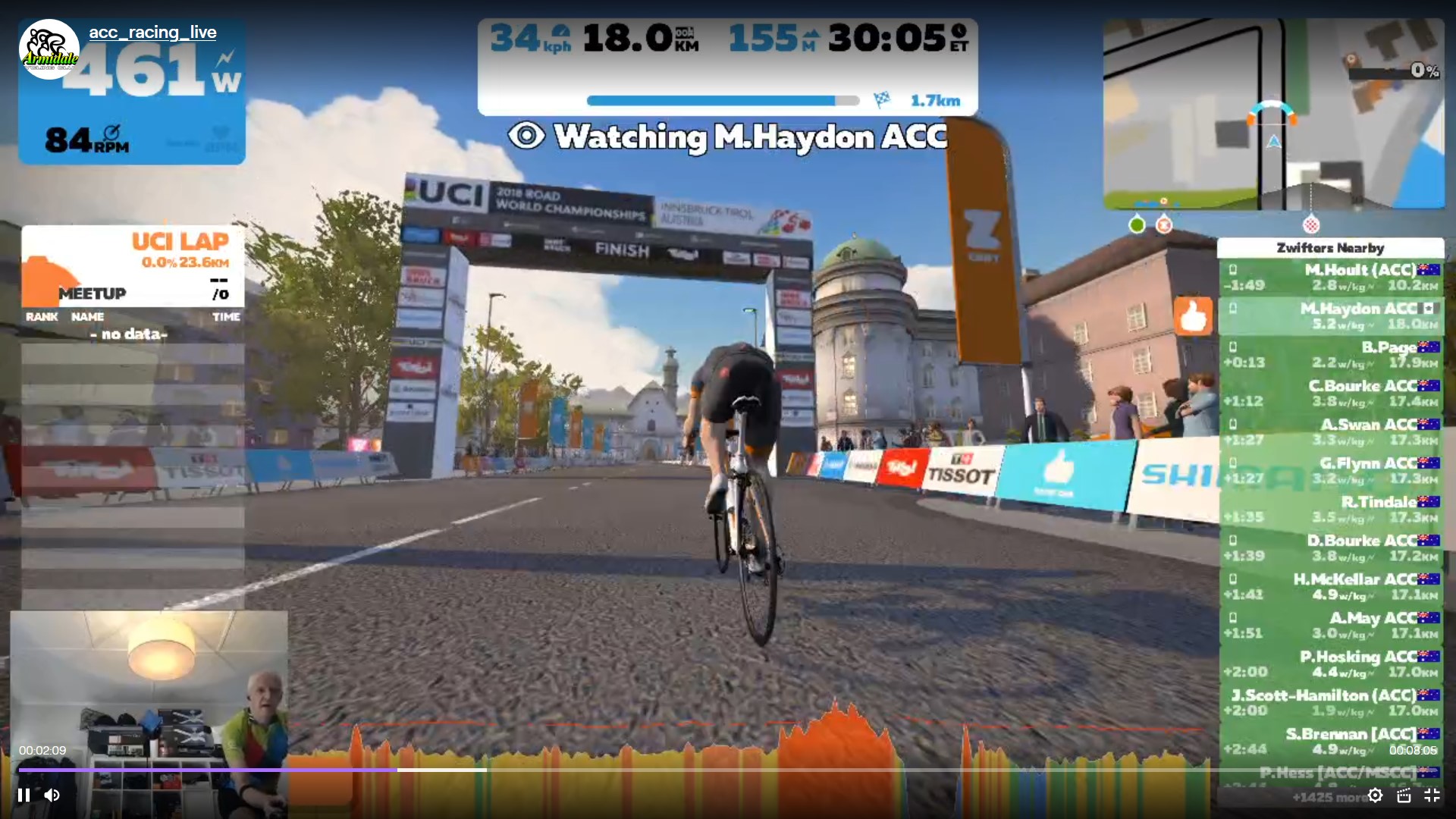 We returned to the punchy Innsbruck-Ring circuit for the last race in the May Rider of the Month (ROTM) series, and a new format to decide the overall winner. For this month the accrued ROTM points were allocated as bonus seconds to be adjusted to each riders finish time, and the rider with the fastest adjusted time would be crowned May Rider of the Month. The race was over 2 laps for 18.1km, which would ensure some fast & furious racing!

With the formalities over, and the graded handicaps allocated, the GO riders were D grade Mark Hayden and Ben Page, who quickly paired up and worked well together over the initially flat parcours. Next down the start ramp was the deadly D grade duo of Andrew May and Greg Flynn at 1:30mins, and they would have every chance of catching the leaders if they could stick together over the infamous Leg Schnapper climb. At 3mins a C grade quartet of Rob Tindale, Clint Bourke, Dene Bourke, and Andrew Swan would need to make a quick start and absorb the riders ahead to hold off the chase. Meanwhile at 4mins another C grade quartet of John Scott-Hamilton, Pete Hosking, Phil Thomas, and Tamworths Ken Boldevy would have to work hard over the relatively short race distance. B grade was next off at 5mins, with a trio of Hayden Freeman, Hugh MacKellar, and Gareth Kelly forming a powerhouse group, while Block was a minute behind with six B graders champing at the bit. Last off at 7:15 was the scratch pair of Olly and Tom Simmonds, and although they had it all to do their smoking performance the previous week signalled they would be in the hunt.

As the riders rolled under the banner to complete the first lap, it became clear that GO were reaping the benefits of regular Zwift racing, and were setting a solid pace that was holding the chasers at bay, with a over 2 mins of clear air and only one more ascent of the Leg Schnapper to come. Indeed as riders rolled through to complete the first lap, this was the pattern of the day, as race-hardened legs in all the groups were ensuring that a high tempo was being ridden across the board, and gaps were proving difficult close down. The only question was whether tired legs would kick in and schnap the elastic at the front of the race!

But as riders hit the Leg Schnapper for the last time, it became clear that no-one at the front was cracking, and strong legs would carry the day as Haydo & Ben held a commanding lead that would see them contest the finish alone. And using his power in the final km’s Haydo broke free to build a decisive lead that he would carry to the finish and take out a clear win – well done Haydo. Ben rolled in for 2nd place a few seconds later, but having accrued a superior ROTM points with consistent performances in every race this month, the adjusted times meant Haydo was the comfortable and deserving winner of May Rider of the Month!

The race finish can be watched here:

As the remaining groups hit the finish line, first to cross amongst the chasers was Clint Bourke to take out 3rd place, and although time gaps were compressed, the chasing groups simply ran out of road to make up the difference. But there were some herculean performances, and there will be some promotions up the grades for a number of riders who go from strength to strength in this racing format.

Well done to all riders for their efforts in every race this month! Next week we take a well earned break from racing for the long weekend, and we will return the following week with an exciting new InterClub format – watch this space!