In the most uneven matchup of the club year, Peter McDonald showed why he is a professional cyclist and we are not.

Saturday saw the Armidale Cycling Club run a criterium at the driver training centre, with a surprise appearance from Peter McDonald, recently returned to Armidale after taking out second place in the Japan Cup.

The race was re-organised into a handicap event in which the graded groups were forced to chase and catch the slower riders 3 times before the 25 minute bell was rung, with the winner to be decided from who stayed away from being overtaken in the final two laps.  This whirling ball of confusion apparently came from the fevered brow of Wilko, who is riding nicely at the moment but apparently not thinking straight.
C grade (Jackie Weston, Dene Bourke, Bob Murison and Wilf Keller) set off as the hares in this experiment, followed by a packed B grade.  Mick Hoult and Andrew Kirk were paired with Peter McDonald to see just how long they could stay with him.  By the 10 minute mark, Peter and his two companions had overhauled the field once, although the effort saw Kirk blow up shortly after and sneakily attempt to take a lap out in an attempt to catch his breath.  Mick Hoult lasted another 5 minutes before signalling he was done with an exploding heart hand motion and dropped back into the B grade bunch.  Peter then set off by himself, rounded up the entire field again, then paused to pick up young Sam Jenner to give him a taste of international level speed.

Sam, despite having a stellar season this year, managed to last only 250m before Peter again disappeared down the road, at which point the race organiser Phil, studying the pain on all the riders faces, mercifully stopped the race early.  Peter was declared the winner.  In the final lap confusion, most of the other riders were declared equal second with Wilko last in what was possibly the toughest criterium of the year. 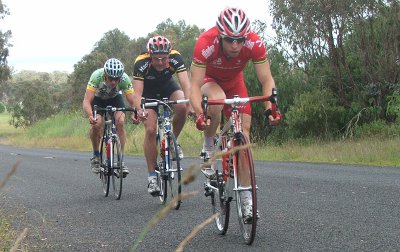 McDonald putting the hurt on Kirk and Hoult