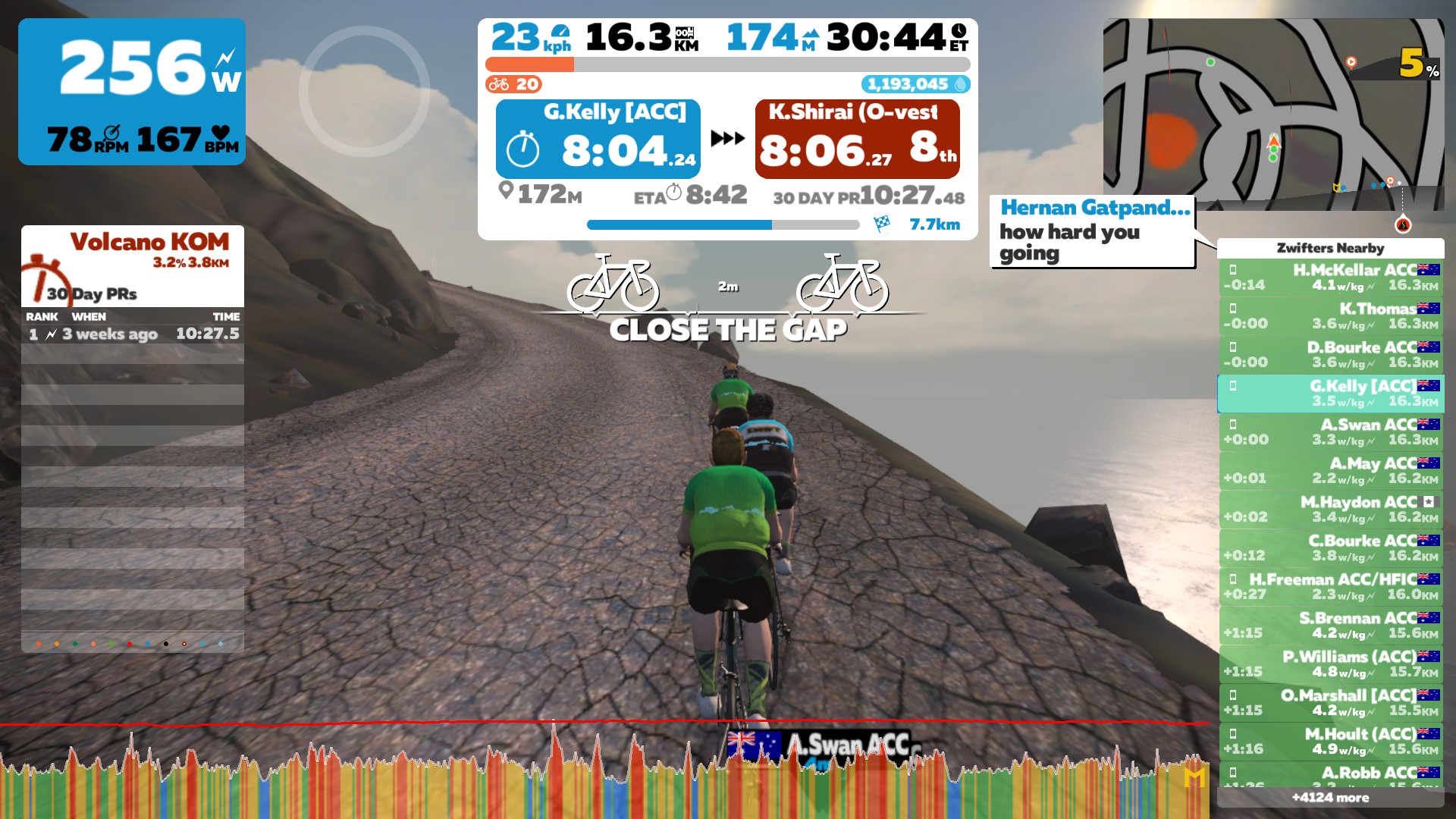 In a first for club Zwift racing, a major ascent was on the menu for Saturdays race – a 3.8km climb of the Watopia Volcano, which would place a premium on strong legs and lightweight equipment.

To take on this mighty challenge, 18 riders lined up at the start for 24km of Club Zwift Rider of the Month (ROTM) handicap racing. It was a welcome to return to racing, aswell as a literal baptism of fire for Andrew May, and he joined Mark Haydon as the pair of GO riders, with 3mins of clear air on the chasers.

First group to start the chase at 3mins was the trio of Phil Thomas, Clint Bourke, and Gareth Kelly. Hot on their heels at 3:45mins was a chasing trio of Hugh McKellar, Andrew Swann, and Dene Bourke, while the last C grade trio of John Scott-Hamilton, Hayden Freeman, and Pete Hosking were also right in the mix just a further 45 secs back at 4:30mins.

B grade comprised 2 groups – a late scratch by Josh Denham who may have had a better offer meant that Sean “Pelvis” Brennan set off solo at 6mins, while a strong Block quartet of Jason Simmonds, Paul Williams, Mick Hoult, and Andy Robb were a further minute back at 7mins, while a Scratch Duo of Olly Marshall and Pete Harris has it all to do as a start line ant+ dongle mechanical delayed Pete’s start and had them rolling off the start at 8:15mins.

The key to the race was who would reach the volcano climb with a potential race winning gap, and as the GO pair hit the molten slopes they still has a healthy 1:30min lead, but the chasing group had coalesced into a 6 strong posse of C grade riders, who had managed to stretch the gap on the last C grade group to over a minute. Meanwhile Block had collected the Pelvis and were still a further 2mins back, with Scratch hot on their heels as Spartacus and Olly put out some monster watts.

An initial attack on the lower slopes by Clint lit up the climb, but it was too soon to go solo as the climb has a long false flat where a group would always be strongest. And it was at this point that Hugh McKellar made his move, having wisely equipped his bike with the rare Meilenstein Lightweight wheels (which can only be acquired on the Alpes D’Zwift roulette) he launched a strong attack on the upper slopes which reeled in the GO riders and by the top of the volcano had stretched to a 40 second lead over his compadres, while the remnant of the combined Block/Scratch group were still 1:30mins back, and with a fast downhill run to the finish would have it all to do.

And so it came down to a high speed chase to the finish, and as the finish line neared the gaps were coming down. But digging in for a sensational solo effort, Hugh held off the greyhounds to take out a great win – well done Hugh! 26 seconds back, the chasing C grade group launched a bunch sprint which saw Keglegs take out 2nd place – nice work Phil; while the last podium place went to another strong ride by Andrew Swann, with Gareth and Dene mopping up the remaining ROTM points. The chasing Block/Scratch group exploded down the finish straight to finish just 11 seconds further back, with Olly just taking out the bragging rights ahead of Spartacus, Jason, and Hammy.

You can click the link below to watch the final 1km of the race live stream.

Well done to all racer for some terrific efforts, and thanks to Phil Hess for dialing into the broadcaast and providing in-race Discord commentary despite the technical issues which had this author jumping off his bike on the volcano descent to fixup the livestream!