One for the good guys 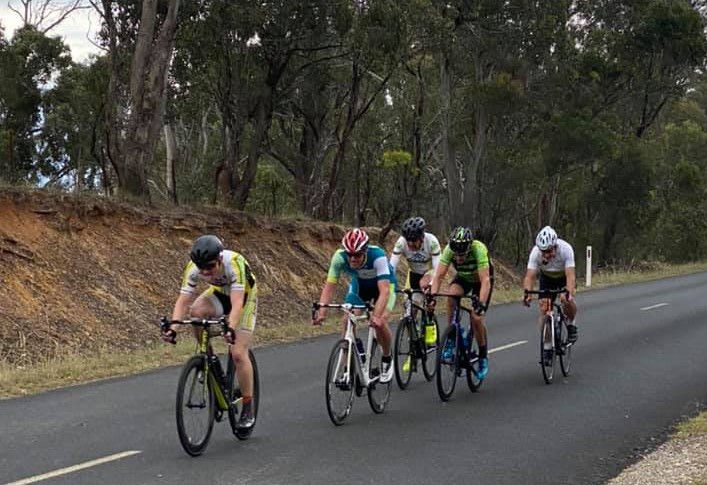 Bringing the curtain down on the 2020 road racing season, we had a final outing on Long Swamp with a 30km graded handicap race, pitting grade against grade, mate against mate!

With ominous rain clouds around, it looked like racing might have been over before it started, but the weather backed off sufficiently to allow a 9 strong B-grade group to roll off as the Go group of riders. Next off was the first of 2 A-grade groups at 3mins, with a super A-grade group riding as scratch a further minute back. Although each A-grade group would be a man down as Olly picked up a start-line flat and Andy helped get the errant tube patched…once this was fixed up Dave Harris motor-paced the pair onto their respective groups and the race was on!

As B grade hit the turn for the end of the first lap, splits were emerging as a 5-strong group of Kirky, Clint, Swanny, Richard Wilko, and Phil Thomas turned first, while the remaining B grade rider Katherine & Pete Hosking, Gareth, and Dene Bourke were 30 seconds adrift and out of the race. The first A-grade group of Johnny, Brent, Holly, Paul Williams, and Andy Robb turned 1.45 back from the leaders, having lost Matt Bedford on the return leg. Meanwhile Super-A had it all to do a further 1.15 back having missed Ollys firepower for much of the first leg.

The second lap saw a ripper of a chase, as A-grade closed in on the B-grade leaders, and it would all come down to who had the best legs on Dump Hill. As B-grade hit the slopes first they launched the Clintos-Express; 10 seconds further back A-grade fired off the deadly duo of Holly & Brent. It was a drag race to the top, but showing off his trademark 2min power Clint held off his foes to take team win for B-grade…well done Clint & the rest of B grade. Brent & Holly took out the remaining podium spots, with super-A grade rider and current RROTY champ Pat Ferris taking out the fastest time of the day.

Well done to all racers for competing as a team in this format, and BIG thanks to Col & Wilf for running the race and doing the signs for the umpteenth time this year…THANK YOU!

Thanks also to Dave Harris & Carl for the moto support and the great camera work…jump over to the club community FB page to check these out.

Next week we return to the crit track for the club junior championships, with senior racing to follow!