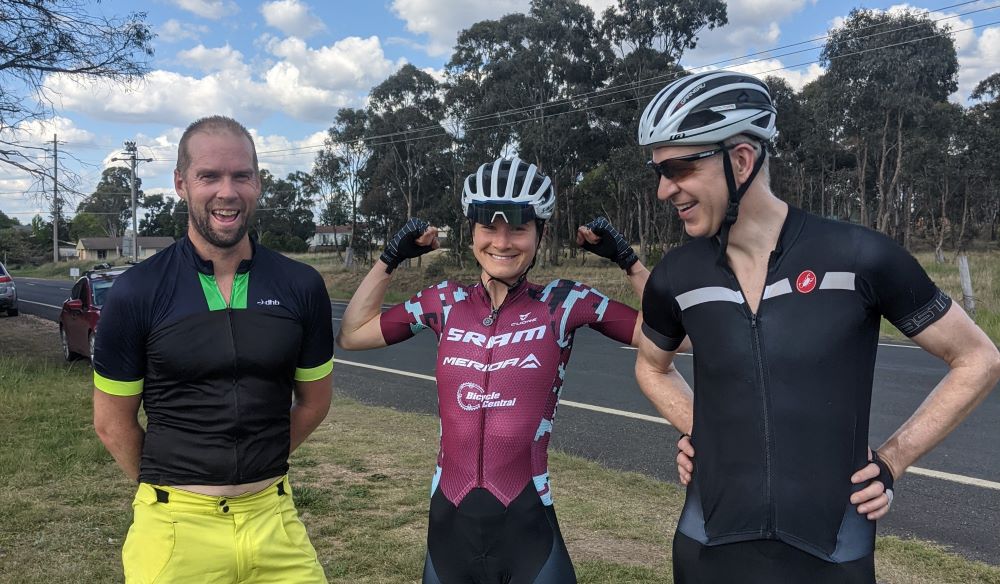 Eighteen riders turned up in perfect raciing conditions for one of the season’s highlights: the inaugural Spring Classic Ronde van Dangarsleigh. The updated parcours comprised 4 gravel sectors totalling approximately 16km of gravel in a 34km overall route. This included the feared Knobs Hill and the 5-star section of Dangars Falls Road which currently has some of the worst corrugations in living memory! Col worked out an interesting modified handicap which proved very unkind for Mark Conroy. Holly presented a ream of medical documents to wrangle a favourable handicap that saw her start 4 mins ahead of personal nemesis, Pat Ferris – one of the many duels that would animate this race.

The GO trio of Jo Wauch, Jacqui and Paul Whitford hit the Monument turn after 13:05 minutes and Jo then zoomed away, fully utilising her trusty cyclocross bike advantage before hitting the firsts section of corrugations. Mark had already lost 30 seconds at this stage, but was still smiling, although that would soon turn to a grimace on the Dangars Falls Road washboard. 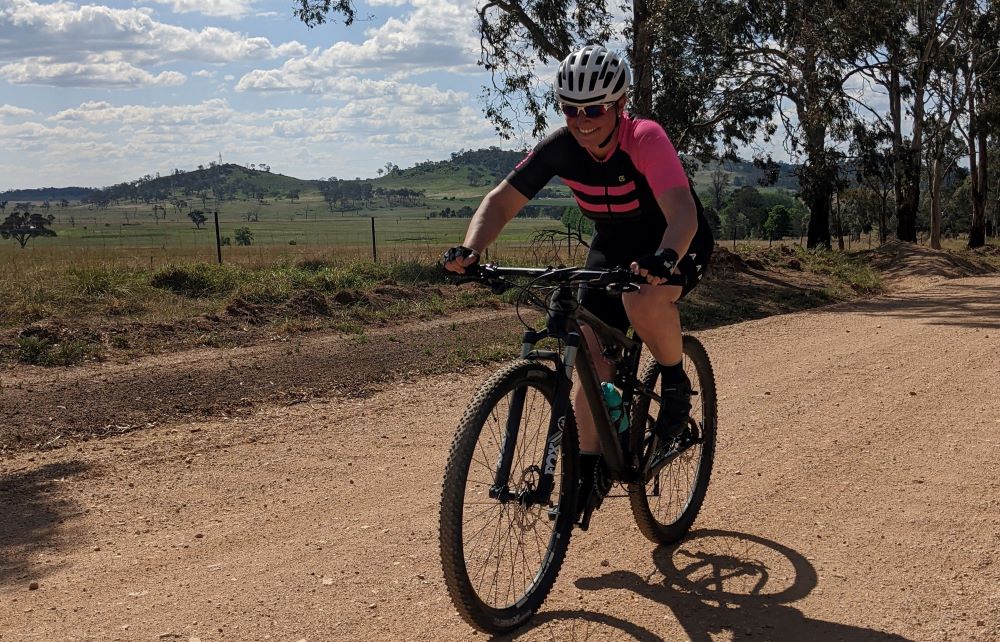 The already sizeable 6 & 7 minute groups had combined as they turned left for the first time at the monument. Meanwhile at 9 minutes Matt Bedford & Hugh McKellar were given the go, and as this pair rolled up the hill Col mentioned to the waiting Shaun Brennan & Andy Robb that they should have set off with them, and so the back off the race was already split at the start line! Last off were Pat & Jason Simmonds at 11mins and they’ld have it all to do to reel in the riders up the road.

Turning left from Black Lane to go up Enmore Rd for the turn-around, Jo emerged first, 16 seconds ahead of Paul, with Jacqui still in contention another 22 seconds back…perhaps working together might have
maintained a greater advantage for the three GO riders. Behind them the 4km of unforgiving gravel had exploded the combined 6-7 minute bunch with Pete Harris & Holly sailing their full-suspension MTBs over the brutal surface, taking back nearly 4 minutes on Jo and hitting the tar 36 seconds ahead of Swanny and Richard Wilko.

Despite the botched start, Andy was obviously on a mission to obliterate the field and he turned solo at 32:57, only 63 seconds behind Holly and Pete – but with a lonely road ahead as Matt punctured out just as the pair had combined and were starting to roll turns, ruling Matt out of a repeat victory from his endeavours earlier in the year. 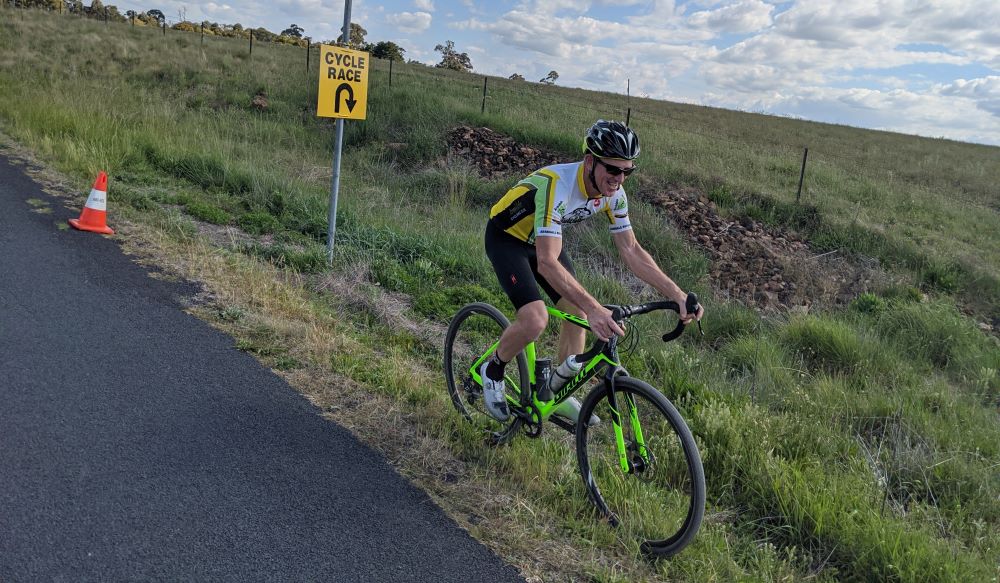 Mark managed to turn just in front of Pete Wilko, and they were followed by a dazed & confused Lachie who was still reeling from the gravel and couldn’t even keep is bike on the tar when it was on offer! Hugh turned next a further 2mins back, and they were followed by Shaun who had been joined by 11 minute man Pat Ferris; it was then another 86 seconds before Jason passed this checkpoint as last rider – with no chance to make an impact this year.

At the Telstra Box right-turn Jo was still in the lead and she was able to hold off Holly and Pete till the top of Black Lane #2 – a great effort. Holly and Pete had made this turn still holding a one minute lead ahead of Andy, Swanny and Richard, and these five looked on course to fight out the places for 2020, as it was only a matter of time before the three GO riders were swept up. 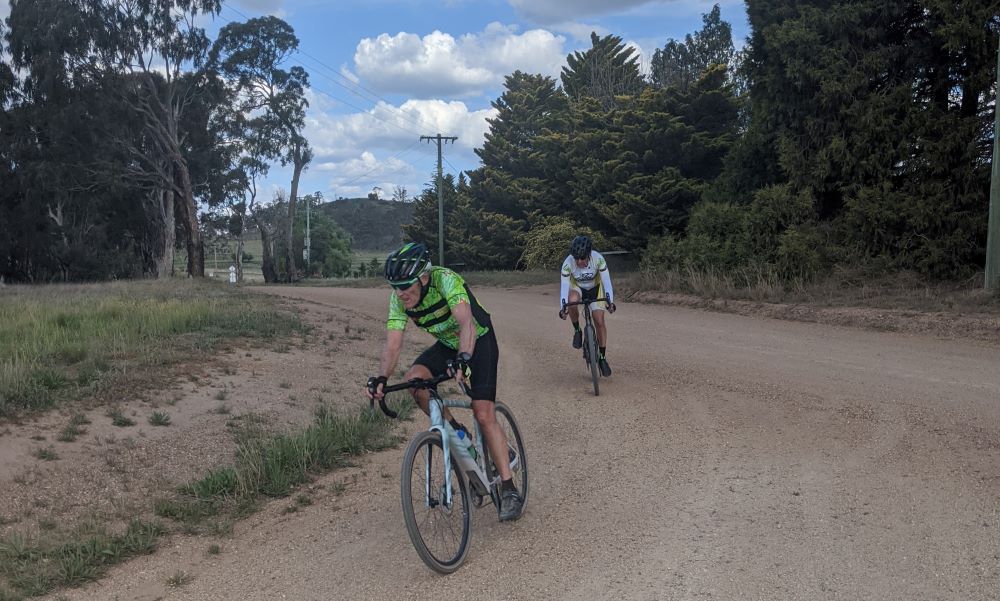 Holly and Pete were first to turn off Dangarsleigh and attack Knobs Hill, but Andy dug deep and closed the remaining 15 second gap to make the catch as they crested top. This trio would roll together to the finish to contest the podium places, and with a mechanical advantage on his gravel bike Andy took the win, with Holly just out-sprinting Pete and taking the fastest time for a MTB rider (32 seconds quicker than Pat!).

One puncture and one other DNF meant 16 happy riders completed the tough parcours. Thanks to David Harris and his Triumph in marshalling turns and spreading dust over many rider and Col for handicapping and managing the race.

Also a huge shoutout to Wilf for the extensive signage across the many turns – I think we all owe Wilf a beer for this one! Also thanks to Wilf for this race report!

Next week we return to the road for the last round of RROTY as we tackle the 40km Dangarsleigh course!