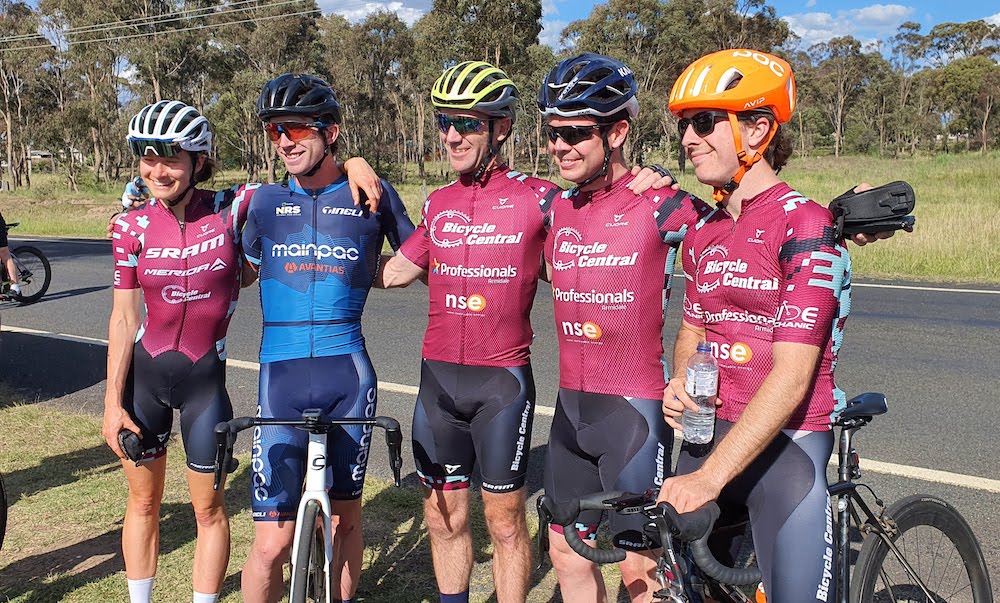 With the curtain coming down on the truncated 2020 road racing season, riders lined up for the rescheduled final round of the Road Racer of the Year (RROTY) competition, and with 5 riders still in with a chance of winning it was all to play for! And with the 40km Dangarsleigh parcours providing a fitting backdrop to the proceedings, it was going to take a strong ride to win the day.

In particular, Pat Ferris was sitting at second place on the overall standings just 3 points behind John Scott-Hamilton, and with both riders setting off in the same group at 12:30 along with Holly, Brent Weston, and Matt Bedford, there was sure to be some interesting tactics as the race unfolded. Also of note was ths strong breeze which would see riders with a tailwind on the way out, and a stiff headwind on the return – anyone caught solo on the return leg would have a tough ride home!

Kicking off proceedings was GO rider Phil Tutt, one of a number of riders sporting the MTB race kit; perhaps an early indication that there could be team dynamics in play. It was 8mins before the first group of riders, with RROTY contenders Chris Belson & Rod Christie rolling off with Richard Wilko, Gareth Kelly, and Bryn Griffiths. It was then another sizeable gap to the next group at 11mins, with a strong looking bunch consisting of Kirky, Swanny, Tinny, Hugh McKellar, Dene & Clint Bourke.

At the business end of the race the 12:30 group were hot on their heels, while a super strong Block group of Houlty, Brenno, Paul Williams, Olly Marshall, and Jason Simmonds rode out at 14mins, with the lone Scratch rider and current COVID club champ Missile Mick Harris at 16mins.

The race quickly compressed as riders headed out towards the turn, and the 11 and 8mins groups were swept up by the chasers behind who were setting a blistering pace. And although Phil Tutt turned first, the killer headwind on the return would soon see him swept up. As riders hit the turn, Block was closing in on the 12:30 group, while those groups ahead had already been reeled in and put to the sword. As the extra distance racing over 40km kicked in, the race exploded on the climb out of Salsibury Waters, and Patty put down the hammer and set a searing pace up the climb – at the same time Block had split and the lead Block riders Jason & Olly added their firepower to the front of the race. This was all too much for the Eagle, and as a small gap opened on the climb he was left stranded as a reduced group of 5 including Holly & Brent ahead powered on; with the Eagle flying solo as they crested the hill and began the run for home. What followed next was a furious chase, as the remnants of Block caught Johnny with the time gap at less than a minute, and together they emptied the tank to try and close the gap. By the M1onument climb it was down to less than 30 seconds, but as tired legs kicked in and the smaller chase group tired it was the front quintet who would take the race to the line. An exceptional sprint saw Brent take out the win – great work Brent!

But all eyes were on the rest of the group, and from a sea of purple MTB jerseys Pat emerged to take second place, and with the remaining RROTY points mopped up by his group it saw Pat jump to the top of the leaderboard and with it the title of RROTY Champion 2020 – congrats Pat for a great season of racing!

It was left to the remaining riders to roll home, and with Paul Williams kindly providing redemption cold beers on the finish line, hard-earned thirsts were slaked and riders were left to reminisce on a great season of RROTY racing, particularly given the external circumstances that have affected this seasons events.

Thanks to Paul for the beers & doing the signs; thanks to Col for running the race, and big thanks to all racers who took part in this seasons RROTY competition. Next week we have a final road race of the year with a fun 30km handicap on Long Swamp!