I guess you can’t blame people for saving a little for tomorrow.  The “Hell of the North West” has a tendency to turn grown men into sobbing wrecks.  Even still, motivation for racing on Saturday was hanging lower than Phil Bookallil’s saddle bag.

In fact, in a combined race that had a total of 4 finishers the dropout rate approached 70% of the entire field.  Excuses could be found everywhere:  A grade caught us, it looked like rain, Wilf broke his wheel and 2 of us needed to stand near him in commiseration, we were tired,  the resurfaced track confused us, we were “saving ourselves for tomorrow”.  The Cannibal won it of course  then I dunno, maybe Iron Mick Hoult and Swannie and Col Maciver not necessarily in that order.  Maybe even Wilko, who surprised us all with his rather gentle, far more traditional motivation of Karlee Macmillan who was racing juniors (I kid you not, it sounded rather fatherly and didn’t include any words from the Big Sailors Book Of Swearing). 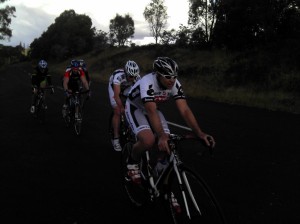 The Cannibal rounds em up, chews 'em up, spits 'em out