A contingent of Tamworth riders filled out the major places in the A grade criterium on Saturday, filling out a small turnout for the first race of the year. 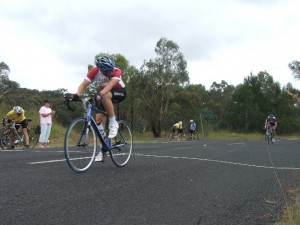 Sam Jenner looking back at the rest of B grade 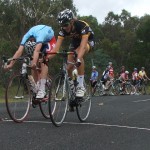 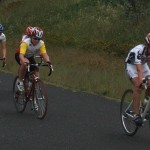 Juniors during the handicap criterium 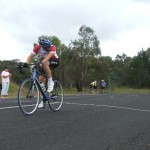 Sam Jenner looking back at the rest of B grade

A contingent of five riders from Tamworth filled out what was otherwise a fairly thin field at the driver training centre on Saturday, with a real paucity of A grade talent.  John Scott-Hamilton started the graded races with A grade at 35 minutes + 2 laps, B at 30 minutes +2 and C at 25 + 2.

The small C grade bunch (Chicka Russell, Wilf Keller, Dene Bourke and Dave Rubie) started fast and rolled turns smoothly until the call was made for half lap turns at the 20 minute mark, at which point Dave popped off the back and circulated lazily for another lap before giving up.  The final sprint was won by Chicka from Dene, re-commencing their rivalry from last year.

The larger B grade field featured Sam and Dave Jenner (the soul men of Armidale cycling), Col Maciver, Ice Cold Billy Mara, Wilko, Jason Blanch, Graham Lewis from Tamworth and Nick Myhill.  A punishing pace saw Nick spat out the back followed by Wilko, with Sam Jenner taking an easy win by simply riding away from the panting field on the final lap.

A grade was dominated by the Tamworth crew:  Josh Apolony, Taj Tucker, Kieren Lewis, Mitch Carrington lined up against Brent Weston and Pat McMillan, quickly splitting the field and relegating Brent to an unusual 3rd place, with the winning sprint contested between Josh Apolony and Kieren Lewis.  Josh shaded his team mate by millimetres to take the win.

As one of the Tamworth riders mentioned, it’s a good time of the year to work out just how much training you might need to be putting in.  In some of our cases, it’s a lot more than we thought, especially if we will be racing much against an impressive Tamworth crew.

One Response to “Tamworth burglars invade the first criterium”