Chris Jones has blitzed the 15km time trial course with nothing but daylight between himself and a fading Bob Weston.  Harrison Munday with a scorching third place.

Bob Weston was using his new “baby vomit yellow” Crack-n-fail, a clearly losing strategy as everybody knows the red ones are faster.

The 8km course was contested by three juniors and one mental junior: 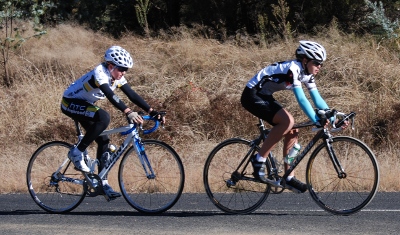 Juniors - about to beat you

An Analysis of Failure

Time trials are a bit tough to write about – the riders disappear up the road on their own journey, sometimes they overtake the rider in front, sometimes they get overtaken.  Sometimes (if you’re Chris Jones) you shoot through the field like poop through a goose.  Instead, I’m going to describe just what it’s like to get flogged by a bunch of kids.  Please forgive the self indulgence.

Now, I like time trials – I have in the past “punched above my weight” in club time trials and generally approach them with some confidence.  I like the challenge of reeling in the rider in front as the 30 second gaps give you a good idea of just how fast everybody else is riding.  Not today though.  First up I make the mistake of volunteering for the 8km race thinking nobody else would do it and the carefully laid plans of Swanny and Wilf would be untested.  Secondly, I’m riding the “junkyard dog” – a bike built to fail, made out of other peoples cast-offs from that nasty auction site on the internet.  People don’t sell stuff they like is all I’m saying.  The noises from the bottom bracket are a testament to this fact.

Anyway, Freya heads off first and generally 30 seconds is about how long it takes to climb the first hill so you can generally keep the rider in front of you in sight on Dangarsleigh the whole time.  However, Freya takes off like she’s been shot out of a rifle.  I wind up as much as I’m capable of and finally sight her but she’s put about 15 seconds into me in the first 2 kilometres.  It’s starting to hurt!  This stupid bike should be more aero than the big orange Orbea (I deliberately put narrow bars and flat bladed forks on it for criterium racing) but it feels like pedalling molasses today.  I suck it up, thinking that she won’t be able to use her big ring on the way back home (yay restricted gearing!) but at the turn the gap is hopelessly large.   She is going to flog me and the other two kids are breathing down my sorry neck behind me, smelling blood in the water.  I finally get on top of my gears but way too late as I crest the final rise and see Freya already crossing the line.  I’m now desperate not to get caught by Adam Bourke and Jack Parker who both looked seriously fast on their trip out.

I run out of puff 30 metres from the line and soft pedal the finish, completely spent, much to the amusement of John Scott-Hamilton.

Now, I’ve been beaten by pretty much all the upcoming juniors over the last couple of years – generally it only takes two or three races for the likes of a Brent Weston or Sam Jenner to leapfrog straight out of C grade and into A and Freya will be no exception.  It was a great ride from her and it won’t be long before she, Adam and Jack are beating you too, so look out!