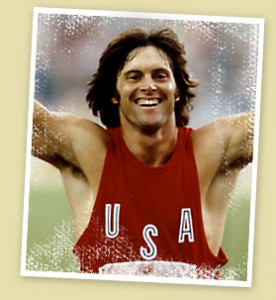 A young Jenner in his hey-day

It’s sad to see the decline in the athletic performance of Jenner, once the toast of the world.  From being the gold medallist at the Montreal Olympics in the Decathlon with a then world record number of points, to being some kind of side-show freak hanging around with a bunch of fame hungry harpies who are famous simply for being famous makes us old folk sad inside.

Thankfully, Bruce Jenner doesn’t race for the club.  Sam “The Jennerator” Jenner and Diamond Dave Jenner (sometimes known as “The D’Jennerate” to give his full french surname) showed up to show everybody just how racing is done.  One with speed, the other with determination.

Jo “Jwoww” Wauch started proceedings in a lonely Go group, turning at the 30 minute mark still with a small lead and yelling “Viva my pants” or something, leaving the race organiser to wonder whether she needed some kind of assistance.  Dave Boundy, in honour of the Tour de Rocks (for which the race entry fee was raised to $10) showed up on a borrowed mountain bike and still managed…nearly last.  Best to leave those kinds of shenanigans to Jason “Knobbies” Blanch Mr Boundy.

The big scratch group had blown through just about everybody by the half way turn other than Jwoww and Sam Munday who was on a charge.  Some very strategic turning at the half way mark by some of the scratch bunch caused a big break at that point in proceedings although the culprits were not able to take advantage of their shenanigans.

Sam Jenner proved victorious in what must be a record for the Long Swamp course, coming in at 45:41 to take fastest time of, well, ever.  Harrison “H” Munday fought to the end to bring in an excellent second place around 10 seconds behind, followed by Dave Munday, Greg “Gregatron” Manttan and Col Maciver.

Finally, Boundy appeared on his monstrous 29 inch aberration, having killed his own group and leaving Bob Murison and Dave Jenner having to eat a constant shower of thrown up gravel and suspension grease.  D’Jennerate crossed the line last, looking relieved to see the finish line.  Bite marks were apparent on the stem of Boundy’s borrowed tractor bike it was so hard to ride up the hills, so ask for a discount if you see anything in the bike shop that matches Boundy’s dental records.

Great ride from Sam Munday which was my pick of the ride of the day.

One Response to “Tour de Jenner”