I held this over until I knew Ice Cold Billy Mara had recovered sufficiently to put up with some bad humour at his expense.  These are the Armidale club members who contested the 30th annual “Cunningham Classic“: 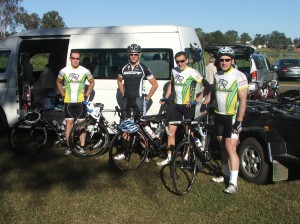 Around a fortnight before the scheduled race from Gatton to Warwick (held by the Kangaroo Point Cycling club) it was clear that Swanny had exhausted every favour he had in the club.  Nobody wanted to drive the bus from the start point to the finish and he’d drawn a line through just about every name in the “usual suspects”.  Out of desperation, he emailed your humble correspondent promising a “free holiday in Queensland, all expenses paid” in a pitch I think he stole from old episodes of “Perfect Match” (er, kids, that was in the 1980s and we had these things called “game shows” that gave away prizes and such, now get off my lawn etc.)

Rugendyke had apparently procured a 9 seater bus via some nefarious means for the trip.  We suspect it had been liberated from the police compound in Tamworth but nobody was asking too many questions.  Self appoined team captain (me) had in fact drawn up an exciting itinerary for the trip which was not taken seriously as it involved exotic dancers and a cornucopia of fine dining for the captain while prescribing a spartan regime for our heroic club representatives.  (No matter, in some places I have worked that itinerary would simply have been called “Wednesday”).

The drive up was interrupted by an appearance by none other than Peter Teschner himself, drawn to the bikes on Dave Harris’ elaborate trailer (something else Rugendyke had acquired via dodgy means).  Teschner posed for the photo below: 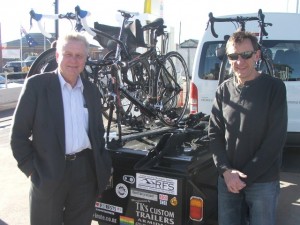 Teschner was generous with his time and keen to give us insights into new bikes that will bear his name, including a crazy scheme to print carbon frame molds to order and wrap them, then dissolve the internals.  Minds boggled, we thanked him and crawled back into the bus.

Invigorated and encouraged by this chance meeting, the crew arrived in Warwick in good spirits despite being tortured mercilessly by the musical tastes of 40 something men.  It is that moment you dread, locked in a hurtling metal box for hours while 3 blokes try to explain the appeal of Leonard Cohen.   Blah blah he’s a poet oh crikey give me strength.  If I never heard “Hallelujah” again it would be too soon.  He’s a boring old fart who sold 3 records in the 1970s and he only sells records now because people are too embarrassed they used to prefer “Ballroom Blitz” and the Bay City Rollers.  I’m not sure what Rugendyke wanted to listen to as he was driving, but I have a suspicion he’s an Adele fan anyway.

True to Swanny’s word he did procure a sumptuous suite for the team captain (albeit only after I admitted I snore like a Peterbilt using it’s air brakes and he wanted to get some sleep).  Pre dinner drinks looked dangerous as the boys tasted some rather fine beer and really looked like they were getting a taste for it but they restrained themselves with admirable fortitude.  Unlike me, who hooked in.   The dinner menu was dominated by an attractive entry:  sirloin served with a half bottle of red.  You could see the sweat beading on Cohen-addled foreheads as they all demurred to meals more suited to athletic activity.  Seeing their disappointment, I was forced to order this meal so they didn’t have to.  Their vicarious experience was spoiled by my reaction to the rather average wine (somebody had to take one for the team).  Served a fraction young and a fraction cold, it’s rather monotonic charm never gave way to notes of sandalwood or cinnamon as a good shiraz ought to.  It might have been Merlot though, I didn’t look at the label as because it was only a half bottle it seemed to evaporate.  Better get another beer then eh?

A good nights rest (fun fact:  you get frost in Warwick!) and another uneventful (although thankfully Cohen free drive) to Apex Park in Gatton.  Now I had harboured some ambition to visit Apex Park due to the famous “Lights on the Hill” trucker and coach driver memorial there, but we didn’t get a chance to admire it.  The park was teeming with activity and the toilets were woefully inadequate, but everybody got signed up and prepared.  Swanny managed to unscrew the valve out of his tubular somehow and the full box of bicycle tools I brought with me didn’t include pliers (who uses pliers on a bicycle!) but Phast Phil came to the rescue with a set he keeps wrapped in his spare boxer shorts.  I didn’t ask why and I don’t recommend you ask either.  I could have sworn I saw Gary Sisson at one point too but figured it was just somebody who looked like him.  The boys hurried off and I bundled the bus out of there hoping to stay ahead of the first race but to no avail – I got caught behind it.  It was an excellent excuse to stop for a bacon and egg roll and a toilet break before sitting about 3 cars behind the main race and enjoying the view at 45km/h.

Because Rugendyke is a mere toddler (in relative terms), he was forced to race in the “Elite B” category against all the teams who didn’t want to do the extended Elite A 130km distance.  “They had radios!” he whimpered afterwards.   They were also super-fit neo pros and while Fingers did the club proud, there was no getting over the organisation of the team based riders.

Swanny, Billy and Phast Phil “Keglegs” Thomas all ended up in Masters C1.  Swanny had his eye on the King of the Mountains but was gazumped by another rider (Jeffrey Collier of the Murwillimbah CC) who left the pack early in the race to secure the jersey.  Swanny organised a brave chase and succeeded in going over the KOM in second, garnering the award for “DWBH Homewares Most Impressive Rider Andrew Swan Armidale CC”.  Most impressive indeed.

After the excitement of the KOM, the riders settled in for a windy drag to Warwick.  Swanny ended up in the leading break of 8, eventually finishing (you guessed it) eighth.  Still an impressive effort.  Not so impressive back in the pack was Ice Cold Billy Mara, who together with Peter Lane from Inverell was taken out by another rider on a tricky causeway a couple of kilometers from the finish.

Phast Phil, not realising that Billy had crashed, continued on (figuring he had just been dropped).  Phil Phinished with a decent sprint somewhere in the middle of the pack.

All of this was unknown to us at the finish as riders gradually crossed the line to be greeted by the team captain holding cokes and beers for our intrepid riders,  having discovered that in fact Garry Sisson and his wife were at the race because Britt was competing.  (just as an aside, whatever Gary Sisson says he saw in Warwick concerning the team captain is an outright lie, especially about his shopping habits.  Never listen to Gary Sisson).

However, as the day dragged on, it became obvious Ice Cold Billy Mara was missing from the finishers and we started making ever more anxious enquiries of his whereabouts.  Finally we were told he was in an Ambulance and being taken to Warwick Hospital which sent our imaginations plummeting (Will they even let him out?).  We stayed to collect Swannys jersey and prize money before setting off for the hospital, Billy’s broken bike loaded rather sadly onto the trailer.

The emergency waiting room at Warwick is decorated with a hideous array of old timey medical instruments, some of which invoked an involuntary crossing of the legs as their purpose became known thanks to the lurid descriptions attached to them.  Billy briefly appeared on a wheelchair, having been x-rayed, scanned, drugged, bandaged, harangued and ignored before they finally released him to our care.  When the team captain exhorted him to walk out of the hospital Billy merely raised his middle finger.  Clearly he was in some pain although the drugs were rapidly taking effect.  He was delivered home with a rather more sombre mood overtaking the bus as we realised this was the second year in a row he was being delivered home covered in bandages from an out of town race.

So there you have it:  celebrities, excitement, culture, anticipation, excitement and a suitably depressing anti-climax to end the day.  Who new Queensland could offer all that?

4 Responses to “Waiting for Billy: Gatton to Warwick roadtrip”