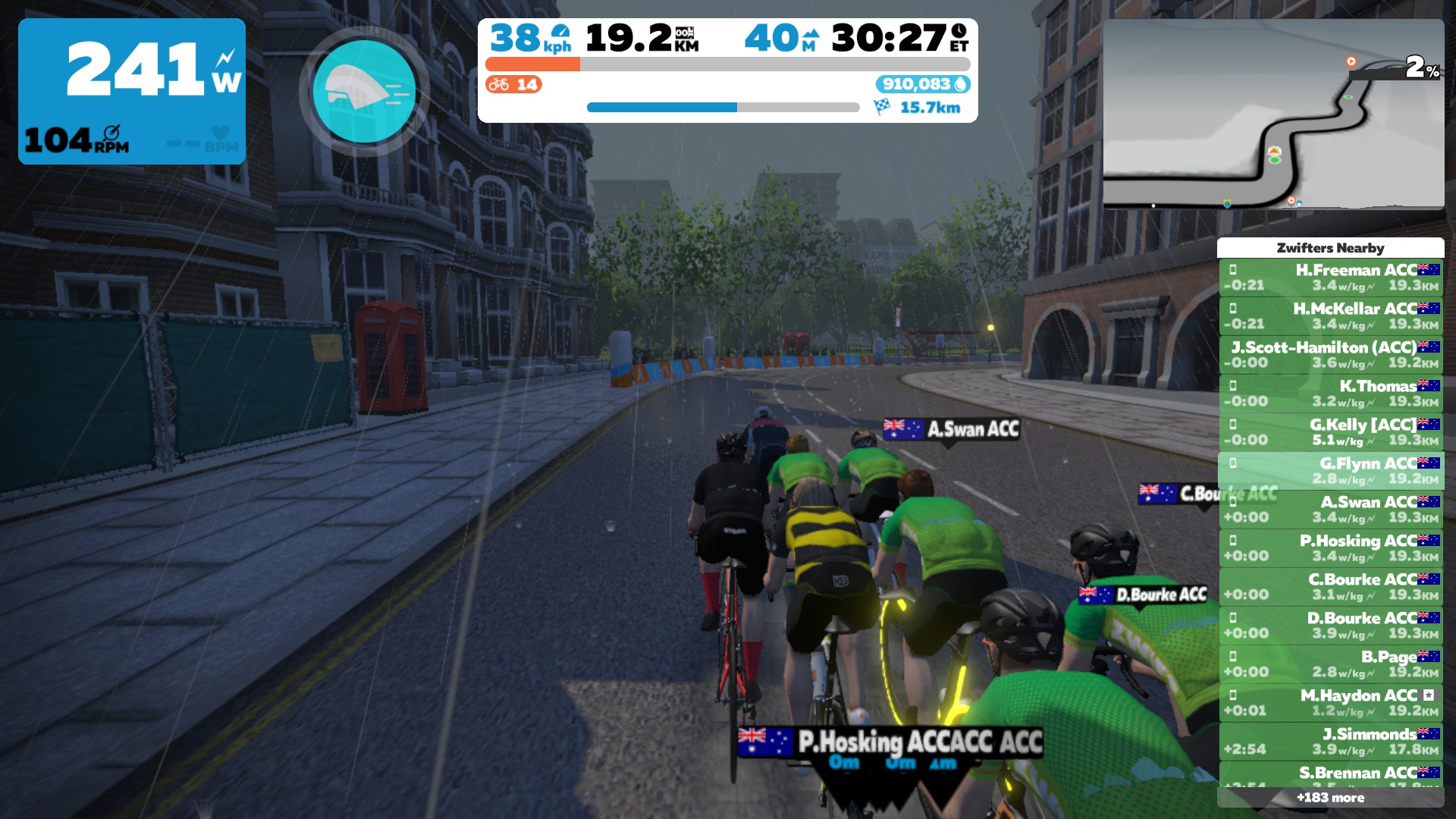 We had a stellar lineup of 22 riders for the Club Zwift Rider of the Month (ROTM) handicap race, which was 3 laps of the Greater London Loop for 34.8km total racing. The race was run in the private meetup format, with club “Houlty Certified” handicaps applied as riders were set off in small groups at the appropriate interval, with first riders across the finish line mopping up the glory and the ROTM points.

GO riders were the trio of new club racer Ben Page, joined by old hand Mark Haydon and Greg Flynn. This trio were meant to have a 2min start on the following group, but timing mixups meant that the next 2 groups were setoff 1 minute ahead of schedule, and this error would have a huge impact on the final results!

Next off was a quarter of Hayden Freeman, Hugh McKellar, Pete Hosking, and Gareth Kelly, who went off at 1min. They were followed just a minute later by a strong group of John “Eagle” Scott-Hamilton, Andrew Swann, Dene & Clint Bourke, and Phil “Keglegs” Thomas.

At this point the timing error was corrected, and the subsequent groups were setoff at the correct timing – but this meant that the next group to follow of Paul Williams, Sean Brennan, Nathan Paull, and ACC expat Josh Denham was at 5mins, and were already staring at a 3min defecit to the group ahead. Meanwhile Block had it all to do a further minute back, although with Phil Hess on monster form and Houlty, A grader Tom Simmonds, and club champ Jason Simmonds bossing the group they would give it a real crack. The sole scratch rider was Olly Marshall, who was on scintilating form, but would have his work cut out a further 1:30 back.

As the race settled down it became a tale of two halfs – the 2 C grade group joined forces on the first lap, and then soon swallowed up the GO riders. Meanwhile, Block had put the hammer down to set a brutal pace, and by the end of lap 1 had caught the group in front to form a chasing pack, all the while leaving Olly with the forelorn task of chasing them down.

By the end of the second lap both group were powering along, but although the gap was coming down, it was still at 2 mins leaving the chopping block with it all to do. And it would prove too much, as strong and experienced Zwifters Hugh, Dene, Swanny, Keglegs, Clintos, Hayden, and the Eagle turned on the gas as they made the final push to the line. And in a frenetic sprint, Hayden dropped a 1000-watt-bomb to launch an early sprint, and although the group sprint tried to close him down, Hayden took out a terrific win – great work. It was a photo finish for the next 3 places, with the Eagle just holding off Hugh, who pipped Pete Hosking for the last place on the podium.

You can click the link below to watch the final 1km of the race live stream.

Almost a minute later, the Block group came charging home, with Tom Simmonds the first to finish from this group to take out the fastest time of the day, and rue what might have been if that minute gap hadn’t been gifted to the front runners at the start of the race.

Well done to all racer for some fantastic and competitive club racing – next Saturday we return to a club sanctioned Zwift scratch race, but with another handicap already in the pipeline!