Today was a big day for Armidale Cycling Club, with the running of the first ever Women’s Club Championships.

The first race at the Traffic Education Centre track was a one lap time trial. Britt Sisson blitzed the field with a time of 1:53. Kath Kelly was extremely pleased with her time of 1:57, while Karlee McMillan was third with a 2:08 and Jackie at 2:10.

Following this race was a 5 lap scratch race, with the field staying together for a sprint finish, where Britt again showed her style, winning in front of Karlee, followed by Kath and Jackie.

The final event was a criterium of 10min+1 lap, and again the field stayed together till the end. Karlee attacked going over the finish line at the start of the final lap, with the others struggling to hold her wheel. She led for the whole lap but in the final sprint was just pipped on the line by Britt, an excellent effort by both girls. Kath was just behind in third place with Jackie fourth again.

In the final standings Britt became our inaugural champion on 15 points and Karlee was runner up on 12 points. Kath was close behind on 11 points, probably needing some longer races to wear the opposition down.

Special mention goes to Jackie who was riding in her first races ever!

Well done to all riders who participated in what will be the first of many Women’s Club Championships. Here are the girls on the start line for the final race (l-r: Karlee, Britt, Kath, Jackie). 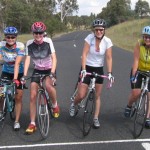