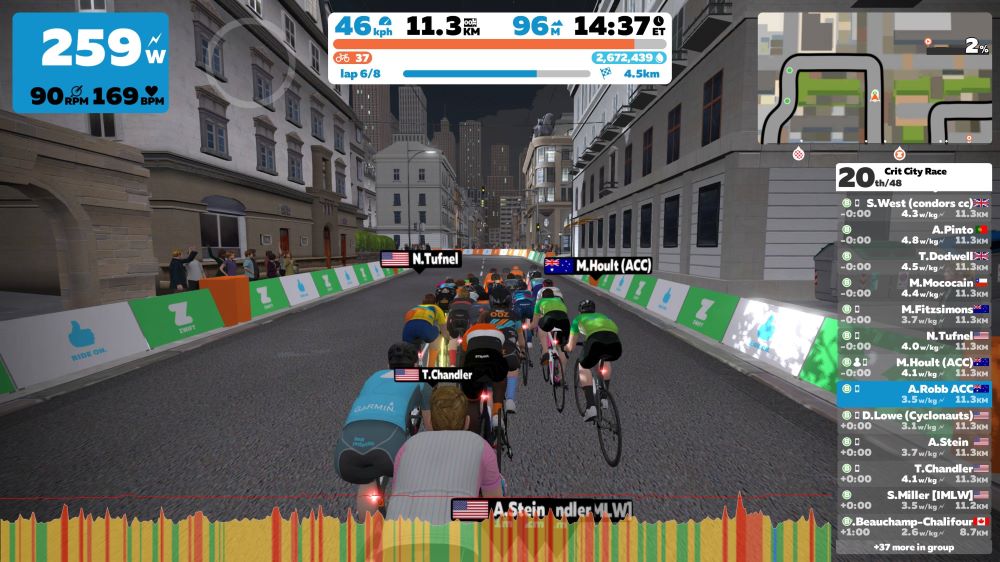 A small group of pioneers lined up for the first club sanctioned Zwift race, with 8 laps of the tricky Crit City track in store, and with riders self-selected into the appropriate grade.

ROTM points will be accrued using the same format as RROTY – 10, 9, 8, 7, 6 for top 5 ACC riders in each grade; 3 points for racing. As this first race was a trial run for the April ROTM competition, only half the usual win-points were up for grabs, with full points being in play from next weekend. ZwiftPower would take care of the race results, and would automatically DQ any riders who sandbagged in the wrong grade!

Pre-race voice chat over Discord had some technical issues, but in-spite of the learning curve there was some solid banter before riders completed thier warmups and settled down to race.

As the start flag dropped in B grade, Brent Weston revved up his new wheel-on Vortex smart trainer, and did some serious pulls at the front of the lead bunch. With a searing full-gas start it required some big efforts just to make the front group, but all ACC riders made split, and with Brent driving the pace Shaun Brennan & Ironman Mick Hoult were also well placed near the front of the bunch and taking advantage of the big draft.

As the bell rang for the final lap the pace revved and Brent paid the price for his earlier efforts and Zwift inexperience as he fell back. The bunch became strung out as the final sprint unfolded and as the watt bombs dropped it was a final surge with an aero power-up that saw Andy Robb pip Mick Hoult at the line to snag 8th place in the race, and maximum ROTM points. Brenno came in 2 seconds further back for 13th place and 3rd on the points ROTM table, with Brent rolling in behind to kick of his ROTM campaign with a respectable finish in his first Zwift race and ROTM points in the bag

Meanwhile in C grade, Dene Bourke was the sole ACC representative, but he would still have to work hard to gain a top 15 finish to be eligible for ROTM win points. As a seasoned Zwifter Dene rode a canny race keeping tucked in the bunch, and with a strong finish he took at 6th place in his grade and with it maximum ROTM points.

As riders cooled down and unpacked the race on the Discord voice channel, everyone reflected on the crazy times we live in, and camaraderie we all enjoyed still being able to race together.

See you next Saturday for Zwift April ROTM Race 2, and watch this space for the nominated race!